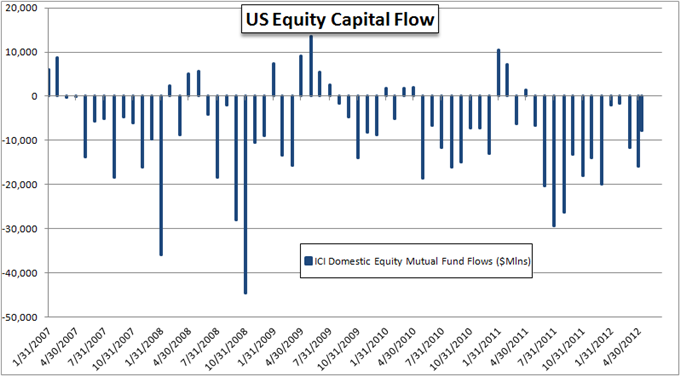 The volatility surrounding initial public offerings (IPO) is notorious; but when large companies come into the market, there is often a draw of fresh capital to get a piece of the action. Attracting new investors into the market is an especially appealing consideration now. Since the 2008 financial crisis, there has been evidence that suggests that retail level investors have not contributed significantly to strong recovery in US equities. The chart below tallies domestic net capital flow in to / out of equity mutual funds measured by Investment Company Institute (ICI).

Given the sell off so far this month, Facebook’s IPO presents a bright light for lost traders to find their way back – assuming they want to be drawn back in. With a listing price of $38/share, the company opened high and subsequently slid. As shares were worked in after the 11:00 AM EST initial trade, the stock showed the expected, exaggerated swings and even encouraged a boost in volatility for fell tech firm Apple. However, as we can see in the chart below, the highly publicized event couldn’t shake loose of the malaise of the broader market. 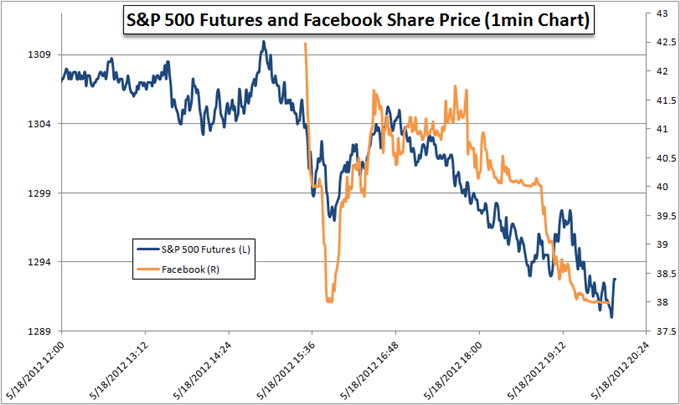 Instead of the Facebook IPO tipping the balance back into the battered bulls’ favor by catalyzing a reversal from an ‘over-extended’ position and drawing new capital into the market, the pessimism of the broader market pulled the stock into its own wake. Through Friday’s close, the S&P 500 is down six consecutive days (the longest bear run since November 25) and has fallen 10 of the past 13 trading days. This is turning into a serious reversal without the ‘flash’ momentum that can quickly snuff a move out. 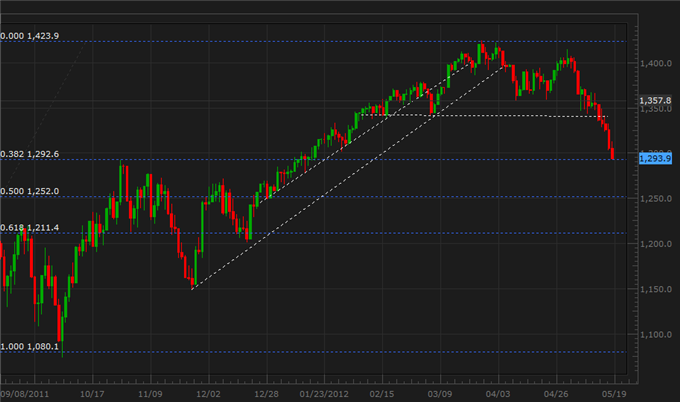 If a headline event like the United States’ third largest IPO can’t rouse enough interest for at least a stall, there is clearly something more fundamentally pressing for the markets to concern themselves with. What could that be?

As stated above, the market recovery since the first half of 2009 has developed through dubious support. With a concerning lack of retail market participation (the bulk of speculative interest under normal conditions), brokers, institutions, hedge funds and governments / central banks (via stimulus) have to do the heavy lifting. Yet, this cumulative interest only stretches so far. Without greater interest from the broader investing community, the climb peters out as the backdrop starts to cloud. Among the concerns that are growing in prominence are the downturn in growth forecasts, expectations of a reduced stimulus safety net, rising correlations across various asset classes (making it difficult to diversify away risk) and a radiating financial crisis in the Eurozone.

In the chart below, we can see the progress in the deteriorating financial conditions for the region just through this month alone. At this pace, the situation is clearly deteriorating more rapidly. As we have seen with the spread of the US-born, sub-prime troubles back in 2008; the transmission of fear and financial retrenchment can have crippling consequences.

In tracking the intensity and breadth of selling pressure, a good read can be found through tracking the relative performance between the S&P 500 and EURUSD. The benchmark equity index is a reflection of the investing interests of a heavily-biased, long-only crowd. Given the heights the stock benchmarks have in particular scaled (with help from stimulus), a reversal can prove lasting.

For contrast, EURUSD follows the primary catalyst for this particular global correction. The European sovereign and banking-level crisis is clearly reflected in the world’s second most liquid currency – especially when paired against the top reserve and safe haven currency, the US dollar. With the bounce from EURUSD and follow through decline for the S&P 500 through Friday’s close, we could see a fundamental pressure relief for Monday or evidence that selling pressure is now self-generating for the capital markets. 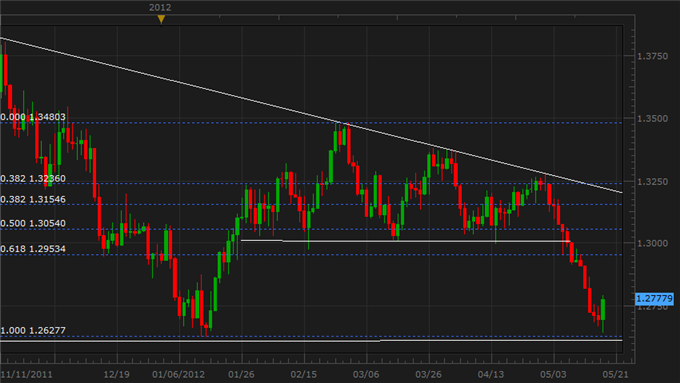