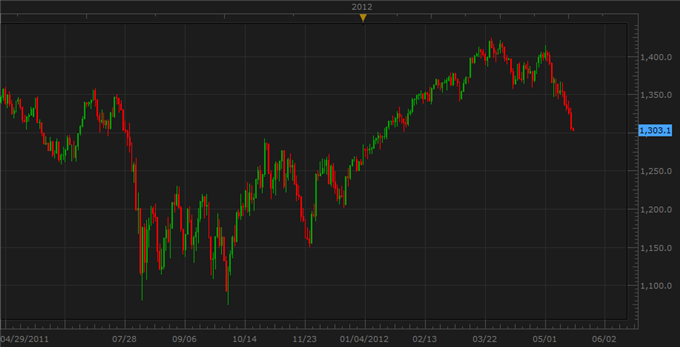 Can the Facebook IPO Revive Equities and Torpedo the US Dollar?

Whether you’re a user or not, you no doubt know of Facebook. The social networking service is visited by an estimated 900 million active users per month and is a cultural phenomenon. Can we expect another, more unusual miracle from the tech giant? Can the company’s IPO help lift the general sentiment and the broader equities market? We will discuss how this event could potentially alter the course of market itself and how – through risk trend connections – it could thereby sabotage the impressive run of the US dollar this month.

First some background on the event itself. Though often discussed in both social (for the number of friends you have) and financial circles (for its questionable revenue stream), our interests lie in the grandeur of the Facebook IPO. With an expected $38 listed share price and expected 421 million shares expected to be released into the market, this approximate $16 billion initial public offering would be the third largest ever. Furthermore, with the sale and pricing, the firm would have a theoretical market capitalization just north of $100 billion. By any measurement, this is a massive undertaking.

It is in the sheer size of this event that the broader market influence can be read. Over the past three months, the backdrop of investor sentiment has slowly begun to deteriorate. With the collective expectations of slower global growth, a rise of financial troubles in the Euro Zone (Greece is a typical headline for any given week) and dependency on stimulus growing painfully obvious, the optimism that has guided the markets since March of 2009 looks to have met a critical tipping point.

Just over the past week, a passive shift in the balance of sentiment has taken a more active pace in outright selling that has driven the benchmark S&P 500 to three month lows and into its most convincing bear trend since August of last year (see the chart below). The wave of fundamental encouragement this move has mustered suggests this is a drive that could turn into a lasting and meaningful trend. A dire situation like this can be turned by few things. One such catalyst over the past few years is the hope for further stimulus and quantitative easing. The other could be a big-ticket event like this that draws in a much-needed shot of capital investment – bolstering fellow sector members and perhaps even the underlying market.

To understand the impact, we should walk through the scenarios for impact. Having already suffered a significant drop, capital markets may find themselves somewhat exhausted and looking for a catalyst to spur a relief rally – whether it eventually turns out a correction or true trend reversal is likely beyond the scope of this event itself. With the 11:00 AM EST listing, the influx of capital and likely rally in share price could lift other industry competitors such as investor and hedge fund-favorite Apple. Such a boost against the belief that a correction is overdue could play as a spark for a pre-existing bias.

Alternatively, this historic event for the equity market could lose its fight against the market’s prevailing fear. If, for example, another jolt of fear is leveraged by the European financial crisis or the realization that the Fed won’t rush to the market’s rescue in this current decline; the masses may ignore the temporary distraction. If there is no bounce to unload, then you sell at market.

Though this is a very unique event, a parallel of influence can be made to the Google IPO back on August 19th, 2004. The day of the $1.67 billion offering itself did not offer immediate lift, but the lead up to the sale saw a significant change in direction (see the S&P 500 chart below). There are no doubt many factors that went into this tide shift, but the expectation of the event buoyed the market outlook. 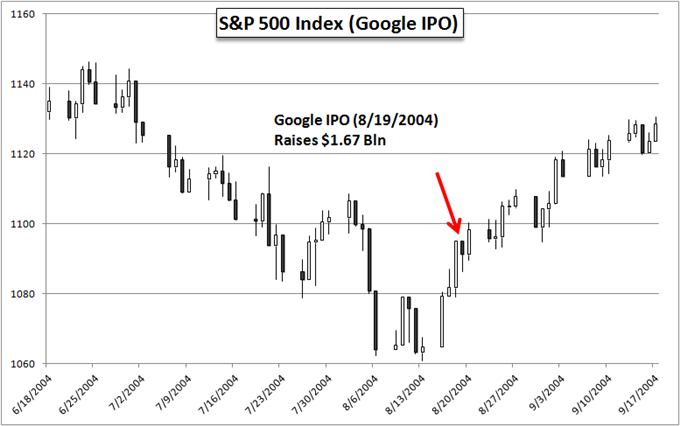 If we can make the case for a meaningful shift in equities, it is an easy step to a heavy FX market influence. The balance of risk and reward is fundamental to every trade made. However, the sensitivity of different assets / currencies to the oscillation between fear and greed can vary. That said, when everything that is considered a safe haven rises and everything with any connection to higher yield (and thereby risk) sinks, we have an overwhelming sign that wholesale ‘risk aversion’ is driving the markets. That seems to be the case currently as stocks, speculative commodities and high-yielding currencies are all dropping while the US dollar and Treasuries (the accepted harbor for all financial storms) advance. You can see this relationship playing out in the chart below since 2008 and showing particularly strong correlation just over this past month. 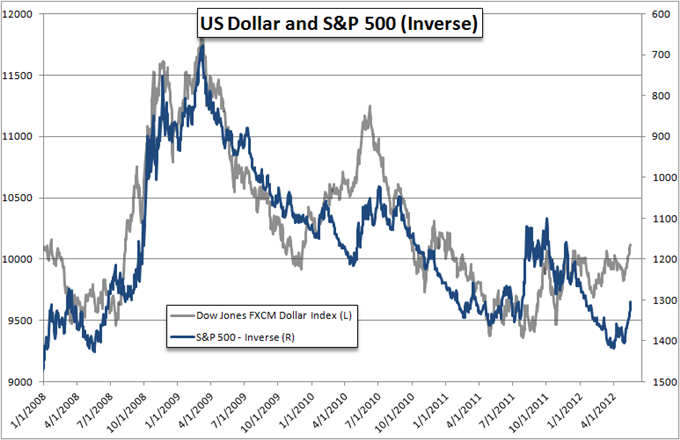 Therefore, if the S&P 500 garners a positive vibe from the Facebook IPO (capitalizing on the need for a correction), the positive sentiment drive could prove an equal weight to the safe haven US dollar. The Dow Jones FXCM Dollar Index happens to find itself in a very sensitive position as well (see the chart below). Having just breached 16-month highs this week, follow through is a tenuous bearing. It requires further encouragement. A positive drive for capital markets spurred by an influential catalyst could sabotage the fledgling move. 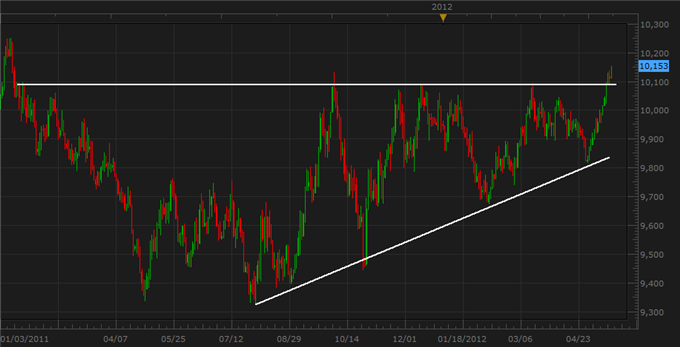 The risk of volatility to equities and the dollar can be applied to particularly risk-sensitive currency pairs. Below we see the correlation between the carry-intensive AUDUSD currency pair and the benchmark S&P 500 Index. This connection to a common fundamental driver (risk appetite trends) means that a sudden shift (or amplification of the prevailing trend) could spur both stock activity and capital flow in the carry trade intensive pairs. 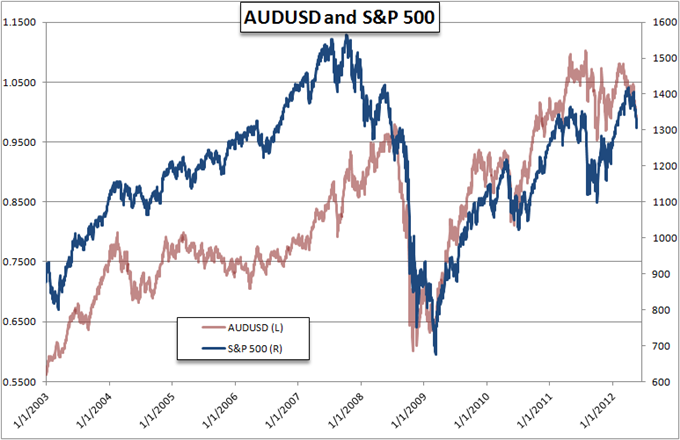 The impact could prove just as significant for a more stalwart currency pair. EURUSD doesn’t have the attachments to yield income that its Australian counterpart does, but recent doubts over the financial health of the Euro-area have undermined the shared currency’s competition reserve status to the greenback. Therefore, reprieve would offer the batter euro a much needed rebound. That said, if the IPO proves a volatility inducement without an optimistic cut, the catalyst could prove painful for this FX benchmark. 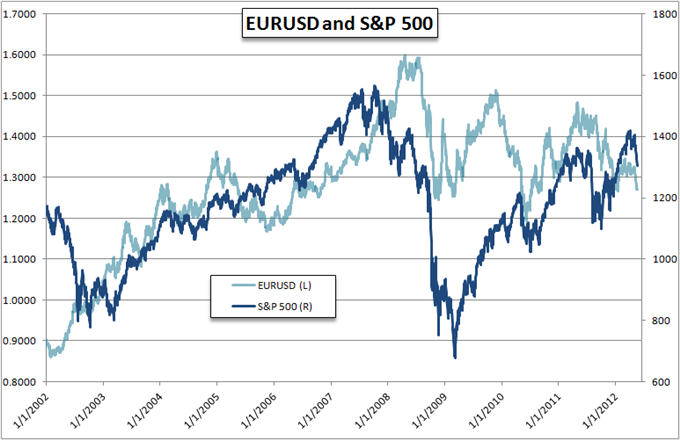 One last thing to consider: though the IPO itself happens very quickly, the impact on the markets could play out over a longer period of time. Post-IPO stock reactions often see immediate volatility as the regular investors plow in, there is a period of accumulation and then early adopters look to take profit resulting in a pullback. To tap into the underlying sense of risk appetite trend (a weighty market state), this event has to truly impress (for better or worse) and work with sentiment that is already inherent in the market. For that reason, we can have an extended impact from this event; but its true influence is as a catalyst rather than the momentum.