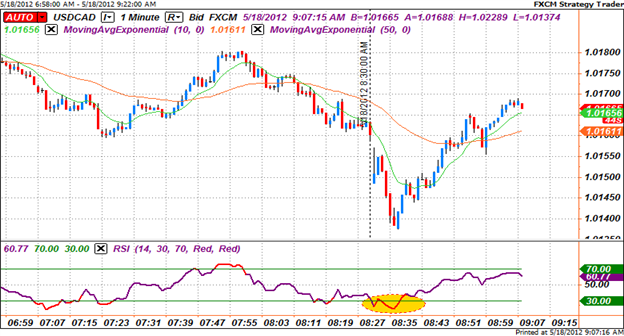 Canada’s inflation remained stable at 0.4 percent in April for the fourth straight month as rising price pressures on automobiles and clothing offset easing pressures on energy and gasoline.

Canada Consumer Price Index is at a current level of 122.2, up 0.4 percent from121.7 in the previous month, the Ottawa-based Statistics Canada reported today. As such, the consumer prices remained stable at 0.4 percent for the fourth straight month. The reading exceeds 0.3 percent gain projected,according to the Bloomberg News survey. Over a year prior, the all items index regained to 2.0 percent from 1.9 percent in March.

The rise in year-to-year cost of energy substantially softened to 1.1 percent in April, following 5.1 percent increase in March and 7.2 percent upsurge in February. Similarly, gasoline prices climbed only 3.3 percent last month compared to 6.6 percent and 8.9 percent in the previous two months. Meanwhile, transportation costs surged 3.2 percent in the twelve months to April while the food prices advanced 2.5 percent.

The Canadian dollar gains ground versus most of its major counterparts ahead of an opening bell in North America trade today. The loonie immediately extended advance in the minutes following the Consumer Price Index report. Canada’s April inflation meets its central bank target of 2.0 percent, thus indicating low chance of rate hike in near term. As seen from the 1-minute USDCAD chart above, the currency pair fell about 30 pips from 1.0160 to 1.0140. Nonetheless, the greenback quickly saw a correction after thirty minutes, trades at $1.0166 at the time this report was written, higher than its level before the data release.