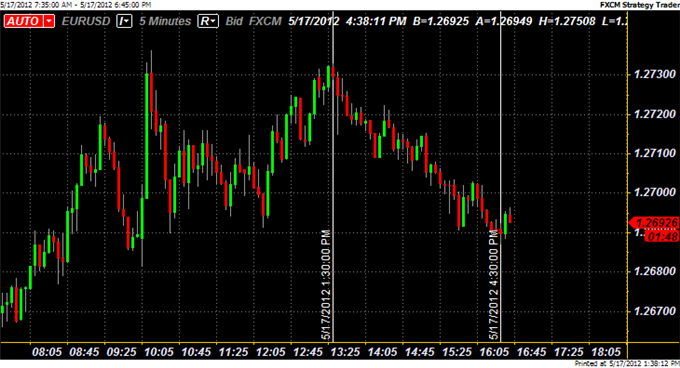 In a widely anticipated announcement, Moody’s announced on Thursday the downgrade of 16 Spanish banks – including the country’s largest lenders Banco Santander and BBVA – as well as Santander’s UK-based subsidiary. The move - coming after the downgrade on Monday of 26 Italian lenders – was the latest reminder of the troubles plaguing Spain’s banking sector, but due to the largely expected nature of the announcement, the Euro held steady against the Dollar near 1.2690.

Moody’s downgrades range from one to three notches for the affected institutions. The long-term ratings for both Santander and BBVA were lowered three notches from Aa3 to A3. The accompanying statement cited the general adverse economic scenario in Spain, the deteriorating credit profile of the Spanish government, potentially reduced scope for additional state support, ballooning non-performing assets, and tight interbank markets.

Thursday’s rating action is only the latest in a series of developments to damage confidence in the Eurozone’s fourth-largest economy. This has been in no small part due to Spain’s ongoing struggle to convince markets of the durability of its banking sector. As recently as May 11, the Rajoy government mandated that Spanish banks beef up loan-loss provision by a further 30 billion Euros on top of the 53 billion Euros already decreed in February. In addition, the government ordered lenders to transfer foreclosed properties in their books to asset-management agencies, and initiated an audit of the banks’ loan books.

However, the measures fell short of establishing a full-fledged bad bank, and the only mention of additional funds was the offer of loans from the national rescue fund FROB at prohibitive interest rates of 10 percent. As a result, the measures failed to assuage markets. Since then, sentiment – and with it, the Euro currency – has only deteriorated further with reports this week that Spanish depositors had withdrawn around 1 billion Euros from Bankia, a lender nationalized by the government on May 9.

Despite the dire nature of Moody’s warnings, the Euro found temporary respite from its most recent selloff, momentarily consolidating within the 1.2690-1.2700 range versus the US Dollar. With the trading session already tested by both a Greek downgrade and a disappointing Spanish bond auction, the generally anticipated ratings announcement barely moved the common currency. However, wih no end to common Eurozone themes in sight – the Greek political impasse, recessions in several of the bloc’s largest economies, as well as the banking troubles in Spain – any consolidation or rebound in the Euro would likely be temporary at best.