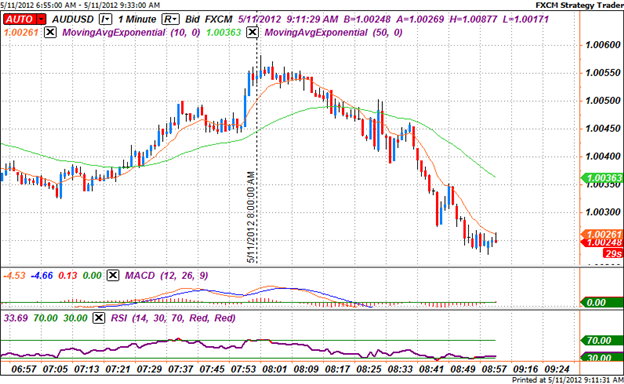 Wholesale price fell for the first time in four months in April on remarkable declines in energy costs, suggesting an easing inflationary pressure on the U.S. production line.

The seasonally adjusted Producer Price Index for finished goods unexpectedly fell 0.2 percent in April after being flatted in March and jumping 0.4 percent in February, the U.S. Bureau of Labor Statistics reported today. Meanwhile, economists surveyed by Bloomberg News had anticipated a print that was unchanged from the previous reading.From a year earlier, wholesale pricesrose 1.9 percent, below 2.1 percent gaininitially estimated and also the weakest reading since October 2009.

The April decrease in finished good index was resulted from 1.4 percent decline in prices for finished energy goods, the largest decline since October 2011. Similarly, the index for intermediate materials, supplies and components edged down 0.5 percent, the first fall since December 2011. The fall is attributable to 2.7 percent decrease in prices for intermediate energy goods. The index for crude materials for further processing also tumbled 4.4 percent in the month due to the broad based declines in prices for crude energy materials (-6.8%), crude foodstuffs and feed stuffs (-3.5%) and crude nonfood materials less energy (-1.8%).

U.S. dollar immediately gains ground versus most of its major peers in the minutes following the Producer Price Index release. As seen on the 1-minute AUDUSD chart above, the greenback rallied 30 pips versus the Australian dollar from $1.0055 to 1.0025. At the time this report was written, the greenback advances 0.56 percent, trades at $1.0026 per aussie.