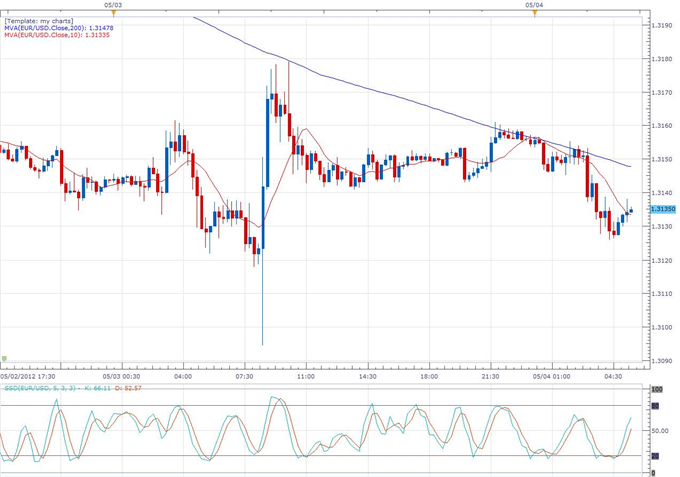 Eurozone retail sales rose by 0.3% in March, beating analysts’ expectations of stagnant data. Sales for February were revised to 0.2% lower from the previous month, and the March data was 0.2% lower from March, 2011. According to the report released by the statistical office of the European Union, retail sales also grew by 0.7% in the 27-nation bloc (including non-Euro nations).

Food, drinks, and tobacco sales remained stable, while non-food sector sales increased by 0.1% in the Eurozone. The largest increases for the month were observed in Bulgaria at 3.9%, while the biggest losses came from Portugal at -2.2%, according to the report. Among the bigger economies, Germany showed an increase of 0.8% in March, while France fell 0.9%.

The data provided a light relief from a two day stretch of weak economic data from the Eurozone. Soft Euro PMIs scared away Euro buyers yesterday and forced a bout of risk-off trading earlier in today’s session. Yesterday’s uncertain comments from ECB President Draghi also contributed to a shaky outlook on the European economy.

The strong retail sales offered a small bounce from earlier session lows following today’s round of PMIs. However, EUR/USD still remained within the two-day consolidation range between 1.3118 and 1.3180. The soft PMI’s mixed with earlier worse than expected UK housing rates set off a broad risk-off trend that boosted the USD against most majors, but EUR/GBP remained relatively unmoved by today’s data.