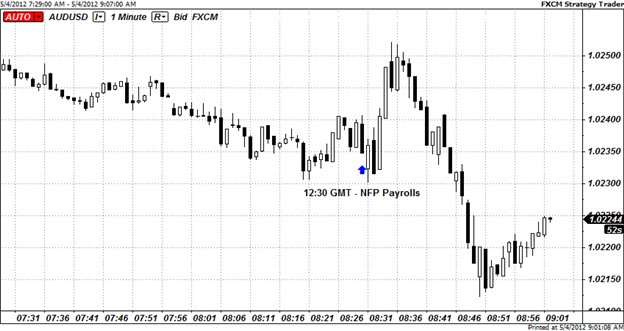 Hiring in the U.S. in April was hugely disappointing, as the rise in nonfarm payrolls (NFP) fell for the third straight month. The U.S. Bureau of Labor Statistics (BLS) reported today that employees added 115,000 workers to their payrolls in April, down from March’s revised figure of 154,000. March's figure had been revised upwards from its original print of 120,000. The median forecast of 85 economists surveyed by Bloomberg News had called for an increase of 160,000. Private payrolls rose by 130,000 in April, down from 166,000 in March, while manufacturing added 16,000 jobs compared to 41,000 jobs a month ago. Employment increased in professional and business services, retail trade and health care, but fell in transportation and warehousing.

Meanwhile, the unemployment rate fell slightly in April to its lowest level since January 2009, declining to 8.1 percent from 8.2 percent the previous month. The drop in jobless rate was due to a continuing decline in the participation rate.

The large miss in NFP fueled concerns that the U.S. economy could be losing momentum, dampening hopes that a stretch of strong winter hiring had signaled a turning point for the economic recovery. The NFP print follows on the back of a disappointing rise in employment in April, according to the ADP’s national employment report that was released on Wednesday.

Following the data release, the greenback initially weakened against most of its major currency peers. However, the U.S. dollar quickly reversed its losses against the higher-yielding currencies as the weaker employment figures weighed on risk sentiment and sent investors back to the reserve currency. After an initial dip, the U.S. dollar rose as much as 25 pips against the Australian dollar, and at the time of the report, the AUDUSD pair was trading at $1.0224.