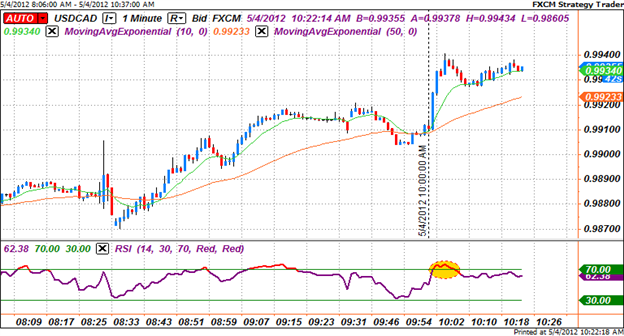 Purchasing activity in the Canadian economy expanded at the slowest pace in nine months in April amid weaker employment gain, lower price pressures and drop in supplier deliveries.

The Canadian Ivey Purchasing Managers Index (PMI) disappointedly fell to 52.7 on a seasonally adjusted basis in April from 63.5 registered in March, the Purchasing Management Association of Canada and the Richard Ivey School of Business jointly reported today. The reading was significantly meager compared to April 2011’s 57.8 and April 2010’s 59.0. The print also falls short of consensus forecast of 61.0 from Bloomberg News survey. Figures over 50 indicate expansion; otherwise values below 50 signify contraction.

Ivey Employment Index for April slightly decreased to 52.2 from March’s 52.7, pointing to weaker employment gain last month. Canada’s unemployment rate fell to 7.2 percent in March from 7.4 percent in February. Yet, analysts have expected the jobless rate to climb again to 7.3 percent last month. Besides, price pressure continued to cool down with the prices index standing at 60.3, the lowest level since August 2010. Persistent strength of the local currency caused additional downward pressure on Canadian inflation.

Ivey Supplier Deliveries Index dropped to 47.4 last month from 48.8 in March, indicating that deliveries were slower than February. In contrast, inventories unexpectedly jumped back a positive territory with the sub-index expanding at 56.8 in April after contracting to 45.7 in the previous month.

Canadian dollar loses ground versus most of its major peers except higher-yielding currencies (Australian dollar and New Zealand dollar) in the North American morning trade today as dismal U.S. employment report dampens risk appetite. The loonie immediately extends loss versus its major peers in the minutes following the weaker-than-expected Ivey PMI report. As seen from the 1-minute USDCAD chart above, the greenback advanced 30 pips against the loonie, rising to the session high of $C0.9940 from $C0.9910. The Relative Strength Indicator crossing above 70 indicated that market participants have been cutting their loonie holdings in favor of the reserve currency.