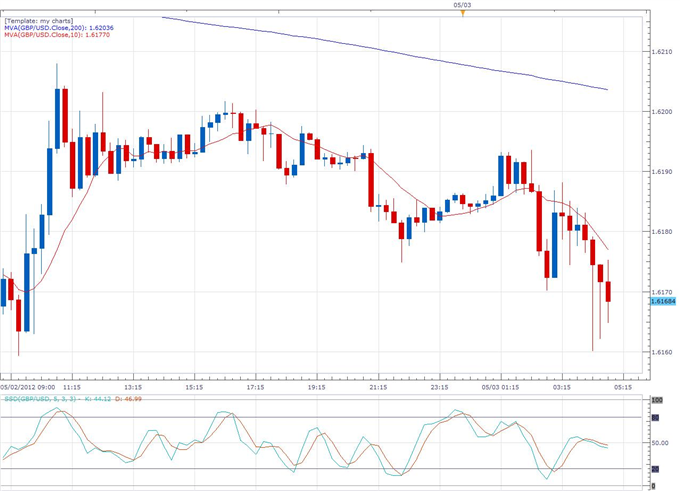 THE TAKEAWAY: UK PMI Services comes in at 53.3 for April, less than 54.1 expected -> Gains in new business in the service sector were outweighed by growing margins -> Cable rises, but sterling takes gains against euro

UK Purchase Manager Index for Services came in at 53.3 for April, it’s lowest point in 2012 and well below analysts’ 54.1 expectations. The index result is still above 50 and therefore signals continued growth in the service sector, but it is lower than last month’s 55.3 result. The PMI has remained positive for 16 consecutive months, but April’s expansion was the weakest since November.

Service sector managers’ expectations remained high in April as there were gains in new business; however the margins for business rose as input costs went up and output charges remained the same when compared to March.

The PMI service is a survey based on material purchases in the service industry and managers’ expectations for the future; the index can be seen as a good gauge for the economy on whole, as services provide for 75% of the UK’s output. April’s PMI manufacturing result was also weak and the UK has entered a technical recession following last quarter’s lower GDP.

Cable fell following the PMI release, continuing an earlier session drop from the 1.6200 level. However, sterling gained against the euro following the index news, possibly the result of further risk-off sentiment.