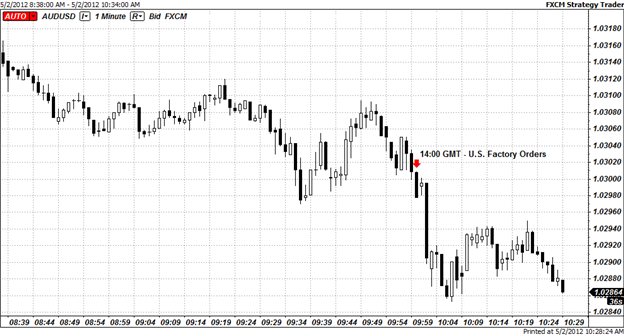 Orders to U.S. factories fell in March for the second month in the last three, due largely to a pullback in demand for aircraft. Bookings declined by 1.5 percent in March, while February’s figure was revised downwards to a 1.1 percent rise from its initial reading of 1.3 percent. The median forecast of 61 economists polled in a Bloomberg News survey had called for a 1.6 percent decline.

According to a report released by the U.S. Department of Commerce today, orders for capital goods excluding aircraft and military equipment, a measure of future business investment, fell by 9.9 percent after rising 1.8 percent the previous month. Shipments of capital goods, which are used in calculating gross domestic product (GDP), climbed by 2.6 percent after rising by 1.5 percent in February. Meanwhile, demand for non-durable goods, including petroleum, rose by 0.5 percent for a second month, while a 0.4 percent increase in unfilled orders signaled a pickup in production.

The factory orders report follows yesterday’s release of the ISM Manufacturing Index for April, which showed that manufacturing in the U.S. probably expanded at the fastest pace in almost a year. Despite last month’s drop in factory orders, the ISM figure indicates that the slump may be short-lived.

Following the data release, the greenback strengthened against the higher-yielding currencies such as the Australian, Canadian and New Zealand dollars. The US dollar advanced as much as 16 pips against the Aussie in the first few minutes as the slump in factory orders pared risk appetite and sent investors back towards the safe haven currency. At the time of this report, the greenback was trading at $1.0289 against the Aussie.