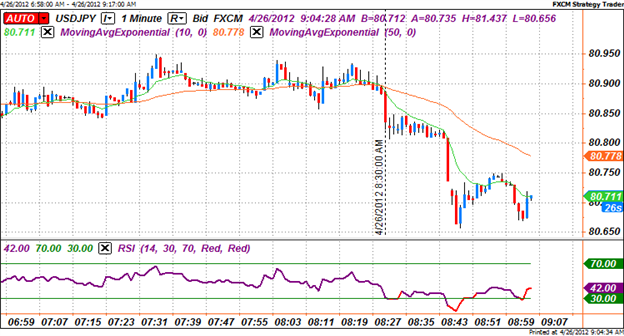 THE TAKEAWAY: March Chicago Fed National Activity Index Fell Back to Negative Territory> Below-Trend Growth and Lessening Pressures on Inflation> USD Tumble vs. Most of its Major Peers

The Chicago Fed National Activity Index, a weighted average of 85 economic indicators, deteriorated to minus 0.29 in March from a revised 0.07 in February, Federal Reserve Bank of Chicago reported today. A negative printindicated a below-trend growth and lessening pressures on future inflation last month. The February index was upwardly revised to 0.07 from an initial estimate of minus 0.09.

The three-month average, which provides a more consistent picture of national economic growth, plunged to 0.05 from February’s0.37. Thoughdisappointingly falling back a negative territory for the first time in four months, three-month average figure has not signaled a possible recession in the near future.

Production-related indicators made a negative contribution of 0.13 to March’s reading with 0.2 percent loss in manufacturing production andno improvement in industrial production. Consumption and housing sector continued to slip to minus 0.28 from minus 0.24 in the previous month, in which rise in housing permits partly offset decline in housing starts. Sales, orders and inventories category add 0.03 to the index last month after contributing 0.04 in February. In contrast, the unemployment rate declined from 8.3 percent in February to 8.2 percent in March and average weekly initial claims for unemployment insurance reached a four-year low.

The U.S. dollar loses ground versus most of its major trading partner except its Canadian counterpart for the second day due to lingering effect from FOMC meeting yesterday. In the minutes following the dismal Chicago Fed National Activity Index report, the greenback immediately extended declines against its major peers. As seen from the 1-minute USDJPY chart above, the reserve currency tumbles 25 pips against the Japanese yen from 80.9 to 80.65. Obviously, the Chicago Fed national index reading today reinforces the concerns about the slow recovery as well as deteriorated manufacturing production and housing conditions in the world’s largest economy.