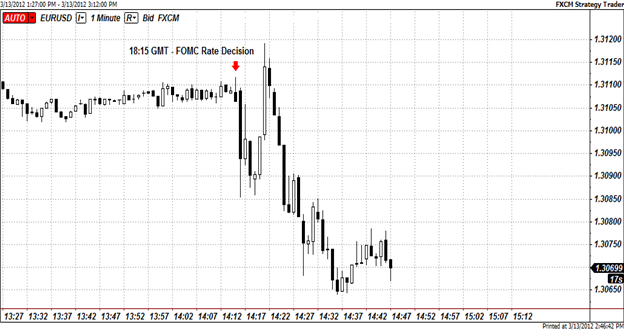 FOMC Holds Benchmark Rate at 0.25% With No Sign of Further Easing

The Federal Open Market Committee (FOMC) announced its decision today to leave the benchmark bank rate unchanged at 0.25 percent and maintain its target interest rate at 0 to 0.25 percent. The decision comes as no surprise, with all 35 economists polled in a Bloomberg News survey calling for no change. The last rate change occurred in December, when it was cut from 1.00 to 0.25 percent.

In its press release, the FOMC noted that the U.S. economy has been expanding moderately, with household spending and business fixed investment continuing to advance. The labor market has improved, with the unemployment rate declining ‘notably in recent months’ though it remains elevated. On the other hand, the housing sector remains depressed. Inflation in recent months has been subdued despite recent increases in the prices of crude oil and gasoline, longer-term inflation expectations have remained stable.

Although strains in global financial markets have eased, they continue to pose ‘significant downside risks’ to the economic outlook. Nonetheless, over the coming quarters, the FOMC expects to see a modest rate of economic growth and anticipates that the unemployment rate will decline gradually towards levels that are consistent with the Committee’s dual mandate for maximum employment and price stability. Although recent hikes in oil and gasoline prices will push up inflation temporarily, the FOMC anticipates that inflation will run at levels at or below those consistent with the Committee’s dual mandate as these temporary factors subside.

In its conclusion, the FOMC reiterated that it expects to maintain a highly accommodative stance for monetary policy in the medium term, stating that “economic conditions – including low rates of resource utilization and a subdued outlook for inflation over the medium run – are likely to warrant exceptionally low levels for the federal funds rate at least through late 2014”. The FOMC also decided to extend its maturity extension program and reinvestment policy as announced in September.

Of particular interest in today’s announcement is the omission of the possibility of a third round of quantitative easing (QE3). In his semi-annual testimony in front of Congress on February 29, Federal Reserve Chairman Ben Bernanke had offered a cautiously optimistic outlook on the U.S. economy but made no mention of a further round of easing. Today’s statement further suggests that the FOMC is softening its dovish tone.

Immediately following the Fed’s announcement, the U.S. dollar saw some initial volatility as investors looked for signs of further easing. However, with no mention of QE3 by the FOMC, the greenback quickly moved to rally against its major counterparts. The U.S. dollar gained 55 pips against the euro within the first 15 minutes, and continued to trade higher at around 1.3070 euros to the dollar at the time of this report.