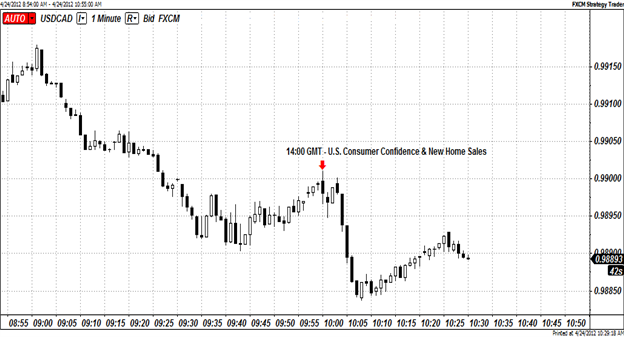 U.S. consumer confidence eased slightly for the second straight month in April. The Conference Board Consumer Confidence Index, a key indicator of consumer sentiment, dipped to 69.2 in April, down from 69.5 in March. The figure in March was originally reported as 70.2. April’s print falls short of the median forecast of 69.6 according to a Bloomberg News survey of economists.

In its report, the Conference Board noted that “the slight dip was prompted by a moderation in consumers’ short-term outlook, while their assessment of current conditions continued to improve.” Overall, consumers were more upbeat about the U.S. economy, though they remain ‘cautiously optimistic’. Consumer outlook for the job market was less upbeat, which is unsurprising given recent data showing that the average number of people seeking unemployment benefits over the past month is at a three-month high while new jobs growth had slowed last month.

At the same time, the U.S. Consensus Bureau and the Department of Housing and Urban Development jointly released a report that showed that sales of new single-family homes in the U.S. unexpectedly declined by the largest amount since February 2011. New home sales fell by 7.1 percent to an annual pace of 328,000 units in March, after February’s sales figure was revised upwards to 353,000 from an initial estimate of 313,000. Economists surveyed by Bloomberg News had expected sales to rise by 1.9 percent to 319,000, based on the original February figures.

After ending the year on a strong note, new home sales figures have been mixed so far this year, registering two out of three months of declines. New home prices also fell in March, declining by 1.0 percent from a month ago to a median sales price of $234,500. The drop in home sales and prices indicate that the housing market may not be stabilizing as quickly as anticipated.

The greenback fell against its major currency counterparts on disappointing new homes sales figures and lower-than-expected consumer confidence. The U.S. dollar fell as much as 18 pips against the Canadian dollar in the first few minutes after data release, and at the time of this report, continued to trade lower than pre-data levels at around C$0.9885.