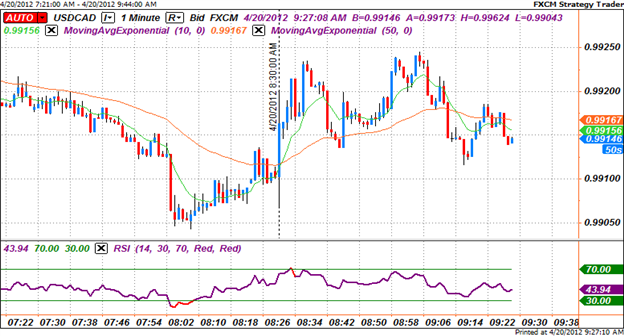 Canada’s inflation has softened in March on slower price pressures for food and energy, dampening expectations for a rate hike in near term.

The consumer price index advanced 0.4 percent last month, following 0.4 percent rise in February, the Ottawa-based Statistics Canada reported today. The reading fell short of 0.5 percent gain anticipated,according to the Bloomberg News survey. Over a year prior, the all items index fell back to 2.0 percent from 2.6 percent in February. This 0.7 percentage point difference was mainly triggered by slower year-over-year increases in prices for food and energy.

Another report issued by Statistics Canada at the same time today showed that the Canada’s composite leading indicators rose for the ninth straight month in February on improvement in financial and housing sectors. The index surged 0.4 percent last month amid consensus forecast of 0.5 percent gain from Bloomberg News survey. Meanwhile, February reading was upwardy revised to a gain of 0.7 percent from an advance of 0.6 percent initially reported.

The composite leading indicator comprised of ten components which significantly affect cyclical activity in the economy and together represent major categories of Gross Domestic Product. Eight of ten components registered gains in March compared to six in February.

The financial components remained positive since both stock index and money supply witnessed the sizable gains in March. Likewise, the housing component recovered on advances in both existing home sales and starts. Meanwhile, manufacturing components showed mixed results with a gain of the ratio of shipments to inventories offset by decline in new orders.

The Canadian dollar gains its footing versus most of its major trading partners ahead of an opening bell in North America trade today. The Consumer Price Index and Leading Indicators reports released today failed to trigger a noticeable volatility in the loonie. As seen from the 1-minute USDCAD chart above, the currency pair fluctuated between the range of 0.9910 and 0.9925 after the release. At the time this report was written, the U.S. dollar trades at C$0.9915.