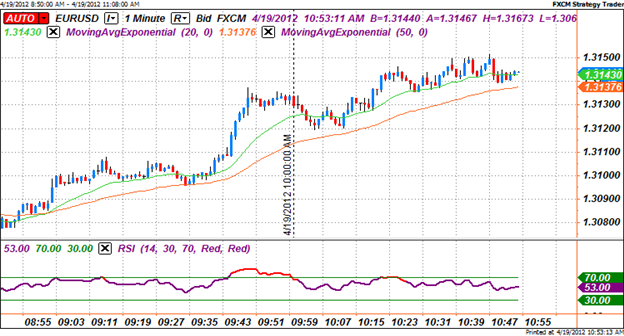 The Philadelphia Fed Index declined more than expected in April, reflecting a modest expansion in the regional manufacturing activity.

April Business Outlook Survey of Federal Reserve Bank of Philadelphia showed the index fell to 8.5 this month from 12.5 in March. The reading exceeds consensus forecast of 12.0 from the Bloomberg News survey. The Philly Fed Index gauges changes in business growth in the third district including Pennsylvania, New Jersey and Delaware. The index above 0 indicates factory-sector growth while below 0 indicates contraction.

Within the Philadelphia Fed survey, indexes for general activity, new orders and shipments all remained positive but slightly weaker than their March reading. On the contrary, the indicator for current employment posted a notable improvement. Manufacturing executives were also more optimistic about their plans for hiring over next six month. Besides, firms continued to report prices pressures that were only slightly more widespread compared to last month, though.

Sales of previously-owned homes unexpectedly fell in March as a result of declining completed transactions of single-family, condominiums and co-ops.

Despite March fall, the recovery is in the process of setting into a higher level of home sales. “The recovery is happening though not at a breakout pace, but we have seen nine consecutive months of year-over-year sales increases, said Lawrence Yun, NAR chief economist.

Besides a decline in existing home sales tabulated when a contract closes, Realtors have reported shortages of housing stocks in some markets. The dwelling inventory at the end of March fell 1.3 percent to 2.37 million, and the lack of inventory in several markets became a profound matter as housing supply could not meet buyer interest.

The U.S. Leading Economic Indicator, a gauge of the economic outlook for the next three to six months, rose for the sixth consecutive month in March, suggesting positive condition in the world’s largest economy in early 2012.

Seven of ten components made up an increase in the March leading index, led by financial and credit indicators and average workweek in manufacturing. Stock prices indicator surged 0.1 percent last month after rising 0.15 percent in February and 0.17 percent in January. Interest rate spread continued its upward trend, rising 22 percent.

U.S. dollar traded mixed in North American morning trade today as the reserve currency strengthens versus higher-yielding currencies and Japanese yen but weakens against Swiss franc, British pound and euro. In the minutes following mixed results from Philly Fed Index, Existing Home Sales and Leading Indicators reports, the greenback weakens versus most of major peers. The U.S. dollar slipped about 30 pips against the single currency from 1.3120 to 1.3150 per euro within 30 minutes and trades at $1.3143 per euro, at the time this report was written.