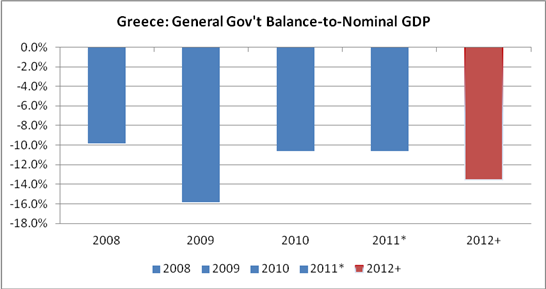 Greek Deficit Report Suggests Significant Dangers for the Euro Ahead

Over the past week, the Eurozone debt crisis returned to headlines with a series of developments out of Spain. For over a month now, markets had shifted away from this issue on confidence that, with the Greek debt swap and subsequent CDS settlement, the worst for the Euro is over. However, today’s first-quarter Greek deficit report serves as an important reminder to Euro traders not to discount further trouble from the country that first sparked the European debt concerns. In fact, more danger for the common currency could very well lie ahead.

The Greek Finance Ministry reported on Wednesday that the country’s budget deficit in 1Q 2012 stood at 7.3 billion Euros, up 52 percent from the same period in 2011. The primary deficit – or the shortfall before interest payments – was 365 million Euros. At the root of the widening budget gap was a 22 percent YoY jump in spending, while revenue rose only 9 percent over the same period.

According to the Greek authorities, today’s figures exceeded quarterly targets. However, if the budget shortfall in the first quarter persists, Greece is on track to see another uptick in its debt-to-GDP ratio.

+Annualized figure based on 1Q deficit and 2011 nominal GDP

This would seriously jeopardize both Greece’s commitments under the second bailout, as well as the country’s chances of meeting the IMF’s projections. 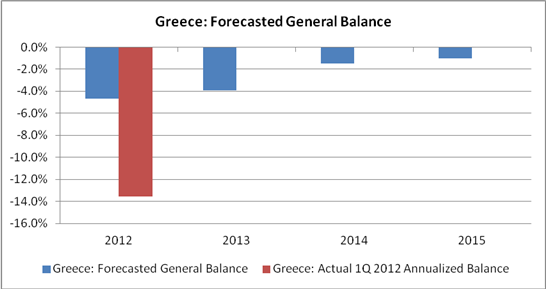 Source: Center for Economic and Policy Research, based on IMF projections 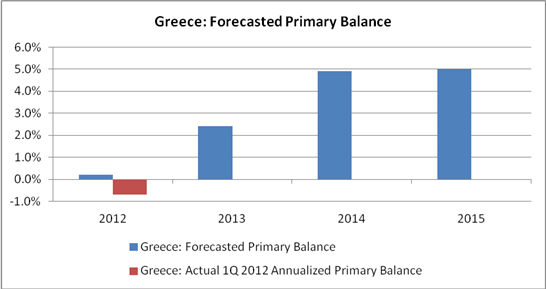 Source: Center for Economic and Policy Research, based on IMF projections

The increase in spending comes as Greece commits to a comprehensive austerity package worth up to 3.3 billion Euros, including a reduction in minimum wage and 150,000 job cuts in the public sector by 2015. In theory, this should contribute to a steady decrease in the debt-to-GDP ratio. But several factors cast successful implementation of these cuts in doubt, not the least of which is political risk.

Parliamentary elections are likely to be called for May 6 this week. While the main Greek parties – include the likely election winner New Democracy – have committed in writing to the austerity measures, the likely new Prime Minister Antonis Samaras did so only reluctantly. With the potential for continued unrest, the political will to fully follow through with the promised cuts is uncertain at best.

The picture on the revenue side is hardly more encouraging. With an unemployment rate of 21 percent, it is difficult to see the country meeting IMF forecasts of a return to growth by 2013, let alone growth of 2.5-3 percent by 2014-2015, implying weak tax revenues for years to come. At the same time, the government’s privatization program has stalled. Though the country has agreed to a target of asset sales totaling 50 billion Euros by 2017, only 1.5 billion Euros was raised in 2011.

As markets continue to refocus attention to Spain, it is important to keep sight of the fragile basis on which the assumptions underlying the Greek debt-swap are based. In this regard, the first deficit report since the debt swap is not encouraging and can only lead to doubts about whether the long-term objective – returning Greece’s debt-to-GDP ratio to a “sustainable” 120.5 percent by 2020 – is attainable. As more missed targets and discredited assumptions come to light, we can expect more turbulence ahead for the Euro.