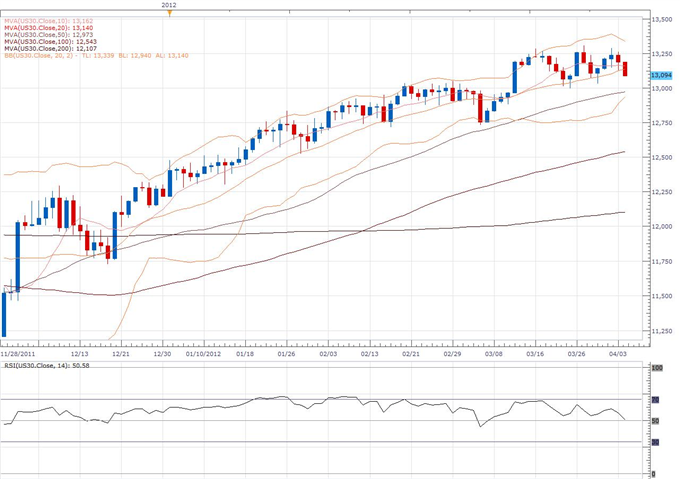 Technical: We could finally be seeing the formation of some form of a top in 2012, with daily studies looking stretched and the market starting to show signs of potential exhaustion. Look for added confirmation on a break and daily close below 13,000 over the coming sessions. This could then open an accelerated decline back towards the 12,500-12,750 area at a minimum.

Fundamental: Yesterday’s optimistic Fed report quashed hopes of a third round of quantitative easing and sent US stocks lower. The Fed saw the improving economy reducing the need for new stimulus, even as the central bank officially sticks to a plan to hold the benchmark interest rate near zero, at least through 2014. Meanwhile, US stock futures declined as demand at a Spanish bond auction dropped. 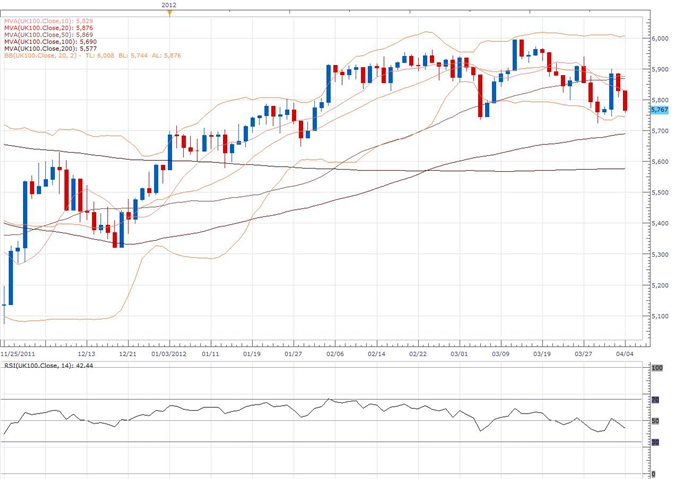 Technical: Recent setbacks have stalled for now ahead of some key support by 5.700. However, we still project weakness over the coming days and look for a clear break below 5.700 to open the next major downside extension towards the 200-Day SMA by 5,575 further down. Ultimately, only back above 5,900 delays and gives reason for concern.

Fundamental:A report that the UK services sector unexpectedly expanded in March failed to offset today’s overall negative risk appetite, as UK stock fell sharply to erase the most recent gains. Meanwhile, an index of UK house prices surged to its largest gain in three years as first time owners rushed to buy before the upcoming expiration of a tax holiday on some home purchases. 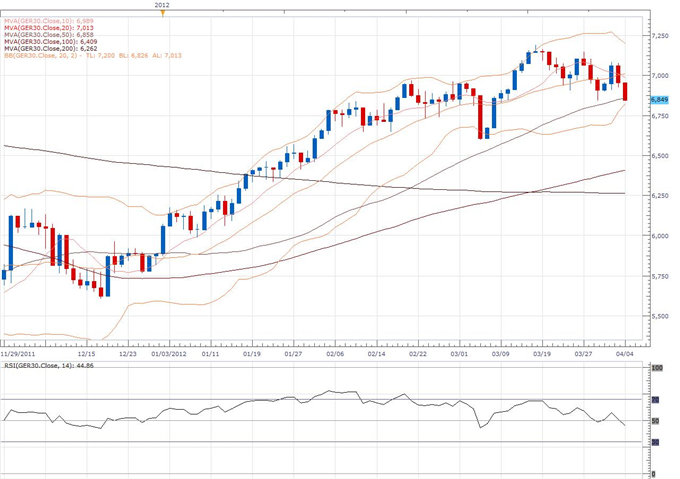 Technical: Rallies to fresh 2012 highs beyond 7,000 have indeed been very well capped and we continue to see the greater risk for the formation of a medium-term top in favor of a deeper decline over the coming weeks. Look for the latest break back below 7,000 on to confirm negative outlook and open an acceleration towards next key support in the 6,600-6,750 area. 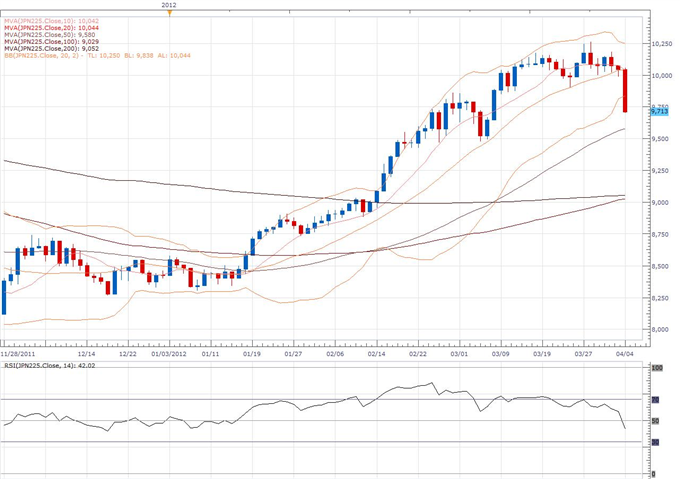 Technical: Daily studies are finally starting to ease from aggressively overbought levels and we would recommend that bulls proceed with caution over the coming days. From here, short-term risks remain tilted to the downside so that technical studies can further unwind. Look for a pullback towards the 9,500 area before considering possibility of a bullish resumption.

Fundamental:Japanese markets retreated significantly today with the Nikkei dropping the most in 5 months and closing below 10,000 for the first time since March 13. Yesterday’s Fed signal, that there would be no more easing, was thought to be influencing sentiment here. 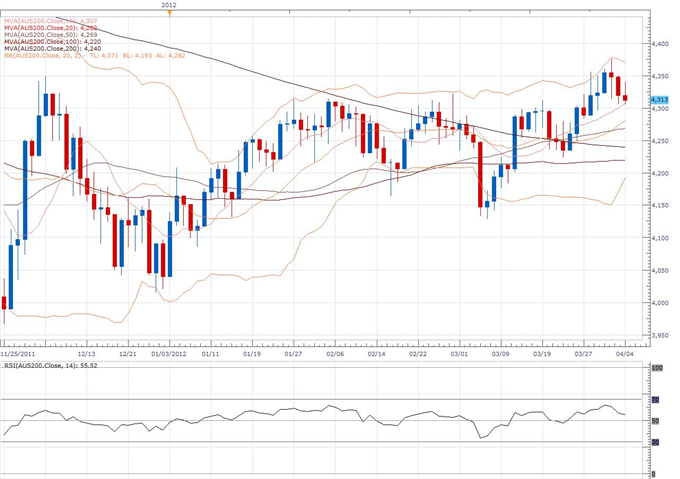 Technical: The market remains locked in a multi-week consolidation dating back to 2011, with any rallies very well offered into the 4,300’s. As such, we expect the range-bound trade to continue and once again look for the recent rallies to stall in favor of a bearish resumption back into the 4,100’s at a minimum over the coming days. A bearish outside day formation on Monday has helped to confirm bias.

Fundamental: Australia today unexpectedly posted its second consecutive trade deficit as coal and metal exports slumped. The development weakened the Australian dollar and intensified pressure on the Australian central bank to encourage growth by cutting rates at its next meeting.