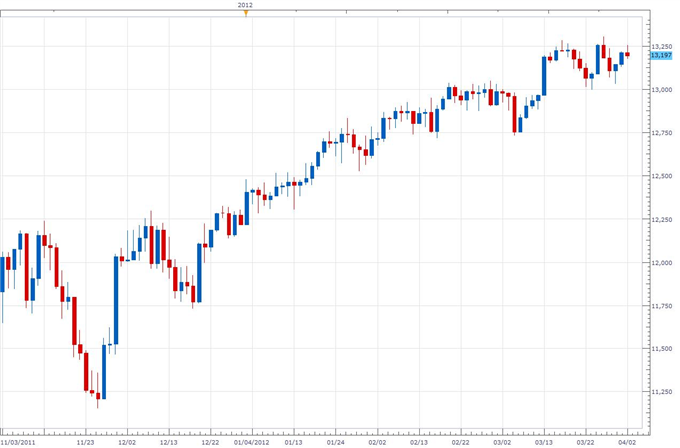 Technical: We could finally be seeing the formation of some form of a top in 2012, with daily studies looking stretched and the market starting to show signs of potential exhaustion. Look for added confirmation on a break and daily close below 13,000 over the coming sessions. This could then open an accelerated decline back towards the 12,500-12,750 area at a minimum.

Fundamental: Positive manufacturing numbers out of China, Europe, and Great Britain did little to prop US markets as US equity futures erased earlier gains ahead of today’s US manufacturing report. The market impact of the report remains to be seen. Meanwhile, the S&P 500 is beating gold by the most in a decade, as 2012’s first quarter brought the benchmark index its strongest Q1 gains in years. Goldman Sachs today recommended going long the S&P. 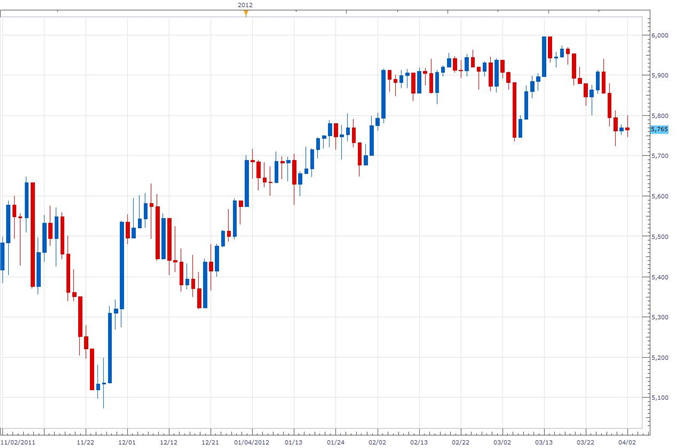 Technical: Recent setbacks have stalled for now ahead of some key support by 5.700. However, we still project weakness over the coming days and look for a clear break below 5.700 to open the next major downside extension towards the 200-Day SMA by 5,575 further down. Ultimately, only back above 5,900 delays and gives reason for concern.

Fundamental: A report today said that UK house prices rose in March for the first time in 21 months as buyers rushed to beat the expiration of a property-tax exemption. A positive PMI manufacturing reading today was thought to bolster sentiment in the UK. Meanwhile, the world’s largest liquor maker Diageo has appointed Goldman Sachs and HSBC for advice on gaining control of tequila maker Jose Cuervo. 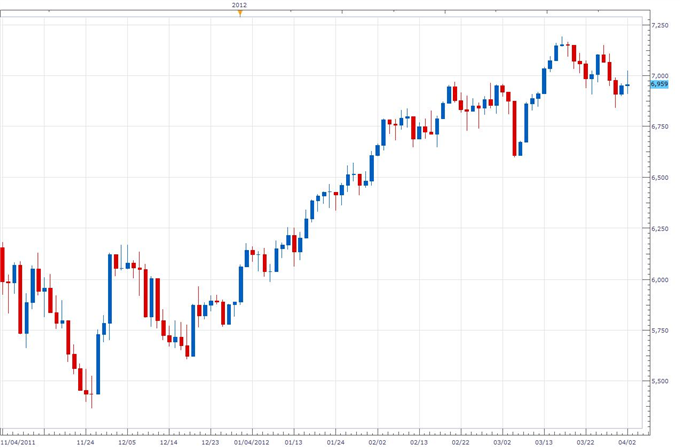 Technical: Rallies to fresh 2012 highs beyond 7,000 have indeed been very well capped and we continue to see the greater risk for the formation of a medium-term top in favor of a deeper decline over the coming weeks. Look for the latest break back below 7,000 on to confirm negative outlook and open an acceleration towards next key support in the 6,600-6,750 area.

Fundamental: The Euro-area manufacturing sector experienced positive results overall in March, sending the single currency past yesterday’s highs against the dollar and bolstering bids intraday against the Yen. The German PMI manufacturing came in better than expected, and European stocks rallied intraday before declining again. Meanwhile, European leaders are seeking additional help from around the world after EU officials boosted the European firewall capacity. 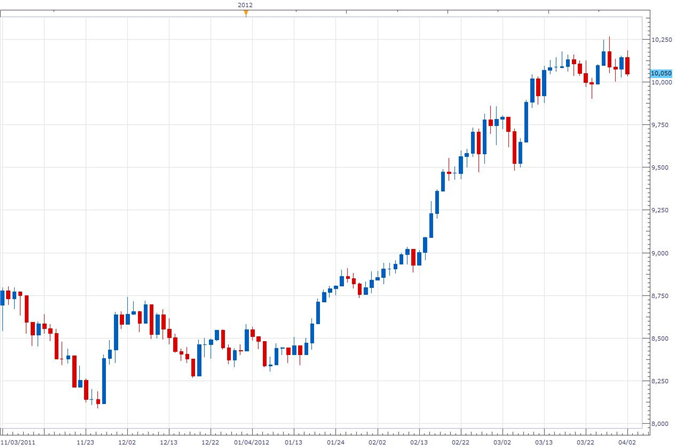 Technical: Daily studies are finally starting to ease from aggressively overbought levels and we would recommend that bulls proceed with caution over the coming days. From here, short-term risks are tilted to the downside so that technical studies can further unwind from these overextended readings. Look for a pullback towards the 9,500 area before considering possibility of a bullish resumption. A break below 9,900 will confirm and accelerate declines.

Fundamental:Gains here have stalled out as concerns of a strengthening Yen have reduced the outlook of exporters. Bank of Japan governor Shirakawa faces pressure from notable exporters to lower the worth of the Yen even further, while traders are expecting a further strengthening of the yen. A gauge of manufacturing confidence today came in unchanged from last month’s figure as executives predicted that the yen will rebound against the dollar. 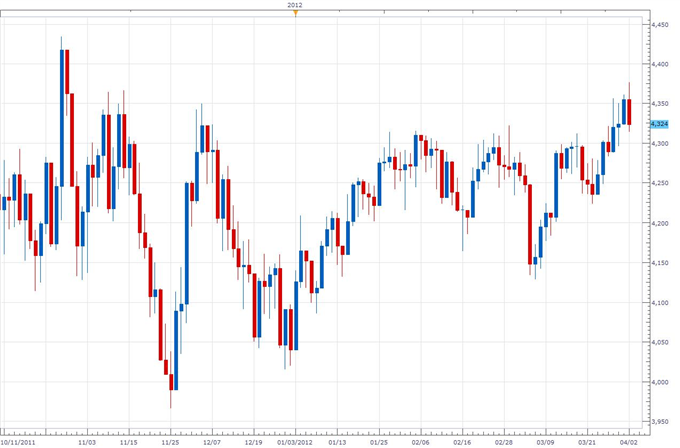 Technical: The market remains locked in a multi-week consolidation dating back to 2011 with any rallies very well offered into the 4,400 area. As such, we expect the range-bound trade to continue and once again look for the recent rallies to stall in favor of a bearish resumption back into the 4,100’s at a minimum over the coming days. A bearish outside day formation on Monday helps to confirm bias.

Fundamental: Aussie stocks declined as after rising over the past few sessions. Signs of slowing growth in Chine and a cut recommendation on raw materials from Goldman Sachs were thought to be contributing to decreased market optimism.