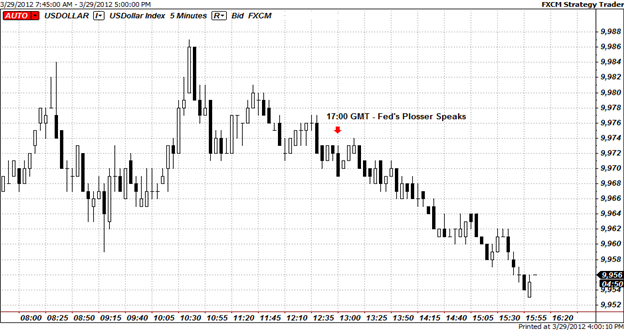 Federal Reserve Chairman Ben Bernanke gave a four-part series of lectures that ended today on “The Federal Reserve and its Role in Today’s Economy” aimed at college students at the George Washington University School of Business. In the first two lectures, Bernanke discussed the history and origin of central banking, the Fed’s experience in dealing with the Great Depression, and developments in central banking since the World War II up to the recent financial crisis.

In his third and fourth lectures, Bernanke described the financial stability and monetary policy responses taken by the Fed in the wake of the recent crisis and recession, the recovery and regulatory changes following the crisis, and the implications of the crisis for central practice in the future.

Bernanke defended the Fed’s actions during the financial crisis, asserting that the Fed’s forceful response during the financial crisis prevented a more severe economic recession. In his final lecture, Bernanke reiterated the ‘sluggishness’ of the U.S. economic recovery, attributing it largely to the slow improvement in the labor market, persistent housing woes and a slow pick up in the credit market. On the other hand, he noted that the Fed has been “quite successful” in keeping inflation low with inflation expectations remaining low, and post-crisis financial regulatory changes will reduce, but not eliminate, the risk of financial crises in future.

The market was largely unaffected by Bernanke’s lectures, as they did not shed any new information on the Fed’s outlook on the U.S. economy. Instead, Bernanke’s presentation was overshadowed by a speech given at the same time by Federal Reserve Bank of Philadelphia President Charles Plosser on the U.S. economic outlook.

As seen in the 5-minute chart above, the Dow Jones FXCM Dollar Index (Ticker: USDOLLAR) had declined significantly through the day. The weakening in the U.S. dollar was largely due to a market shift away from risk aversion, as investors moved towards higher-yielding currencies.

The greenback fell further this afternoon on the back of Plosser’s speech. Taking on a hawkish tone, Plosser’s outlook was generally upbeat, as he played down the need for fresh stimulus from the Fed, saying that ‘we should not anticipate additional accommodation’. Furthermore, “in the absence of some shock that derails the recovery”, there may be scope for the Fed to raise rates before the end of 2014.

Plosser stated that the U.S. economy is continuing to grow at a “moderate pace”, with growth levels likely to come in around 3 percent in 2012 and 2013, and went on to say that “the outlook for the jobs market will continue to improve, with job growth strengthening and the unemployment rate falling gradually over time”, adding that he expects the unemployment rate to fall from its current level at 8.3 percent to below 8 percent by year’s end, most likely to 7.8 percent. Nonetheless, Plosser acknowledged that inflationary risks remain and the “potential effects of the continuing sovereign-debt crisis in Europe” continue to pose downside risks to the U.S. economy.