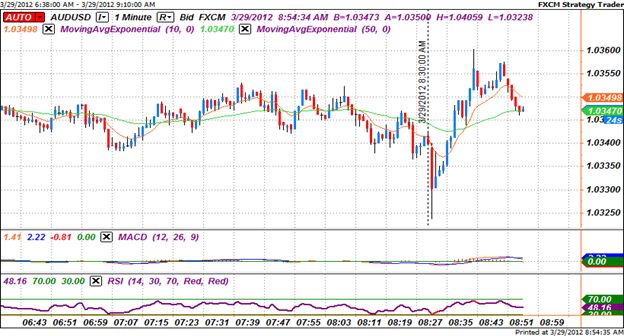 THE TAKEAWAY: The U.S. Gross Domestic Product Holds at 3% in Fourth Quarter > the Third Round of Quantitative Easing Remained on the Table> U.S. Dollar Pares Gain

The third estimate of the growth of the U.S. economy for the fourth quarter of 2011 was unrevised from the prior estimate, Bureau of Economic Analysis reported today. Real gross domestic product (GDP) holds at an annual rate of 3.0 percent in the fourth quarter, the fastest pace in more than a year and half. The print was in line with expectations as most economists polled by Bloomberg News had predicted no revision from the 3.0 percent growth initially reported. In the third quarter of last year, the world’s largest economy expanded at 1.8 percent.

The largest contributors to the acceleration in real GDP growth were a pickup inventory investment and surges in personal consumption expenditures and in residential fixed investment. U.S. personal consumption expenditures increased 2.1 percent in the fourth quarter compared with an increase of 1.7 percent in the third. In addition, consumer spending for durable goods speeded on more spending on motor vehicles and parts. Partly offsetting these contributions to growth were a downturn in federal government spending, a pickup in imports and a larger decrease in state and local government spending.

For the whole year, real GDP increased 1.7 percent in 2011 compared with an expansion of 3.0 percent in 2010. With the unemployment rate stubbornly high at 8.3 percent, the recovery in the world’s largest economy so far seems to hardly worth celebrating. In his speech in London on Tuesday, Federal Reserve Bank of Boston President Eric Rosengren forecasted that the U.S. economy will grow 2.5 percent this year. He also said that “If real GDP does not grow more rapidly and unemployment remains at its current unacceptably high level, monetary policy may need to be more [simulative]”. Apparently, the Fed still leaves the door open for another round of quantitative easing to boost the economy and support the labor market.

The U.S. dollar gains ground versus most of its major peers except its Japanese yen counterpart ahead of the North America trade today. Regardless, the reserve currency immediately pares advance in the minutes following the gross domestic product report. As can be seen from the 1-minute AUDUSD chart above, the greenback slipped about 35 pips versus the aussie from 1.0325 to 1.0360 within fifteen minutes. At the time this report was written, the dollar saw some correction, trades at $1.03470 per Australian dollar.