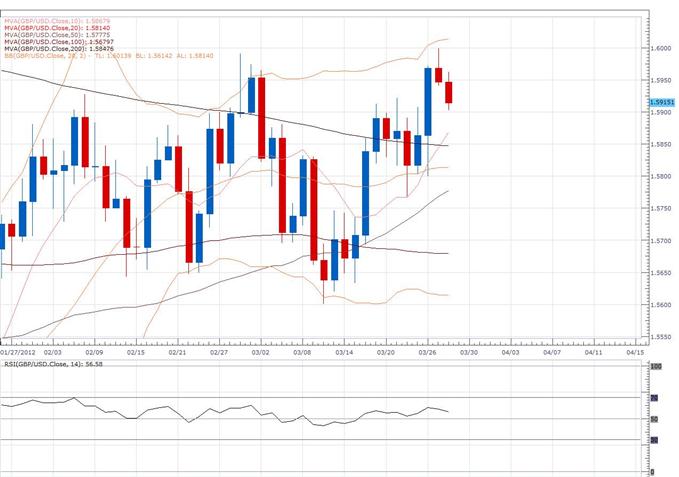 The economy of Great Britain shrank 0.3% during 2012’s last quarter, the UK stats bureau said today in a release. The contraction was more severe than the forecasted 0.2% drop. The economy grew 0.5% when compared to the previous year, compared to 0.7% predicted.

Losses in the services sectors propelled the GDP pullback, a breakdown of the data showed. Particularly, rising fuel prices propelled an output decline in the air travel industry. Despite recent initial indications that Q1 2012 numbers would be better, speculation that the Bank of England will support another increase in quantitative easing continues to encourage downside risk in Sterling.

Board members voted unanimously to keep rates at ultralow levels, the most recent BOE minutes revealed, those who supported increasing quantitative easing but were outvoted 7-2. A majority of BOE members said increased quantitative easing would send a message that the economy is worse than it actually is; however, dovish board members Miles and Posen argued that more is needed to maintain the economy's supply capacity. Cable declined 30 points on the less that stellar GDP numbers, breaking through multi session support at 1.5922 to reach a session low by 1.5900.

Cable declined 30 points on the less that stellar GDP numbers, breaking through multi session support at 1.5922 to reach a session low by 1.5900.