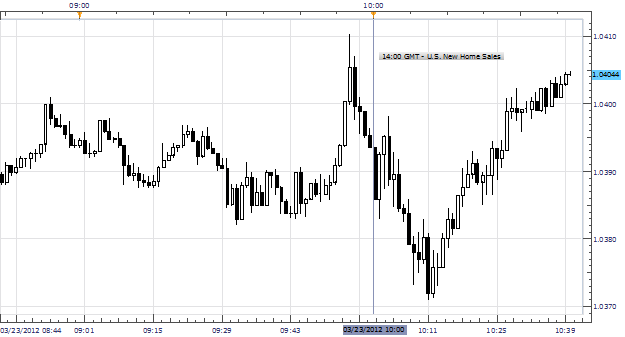 Sales of new single-family homes in the U.S. unexpectedly declined for the second straight month in February. According to estimates released jointly by the U.S. Consensus Bureau and the Department of Housing and Urban Development, new home sales fell by 1.6 percent to an annual pace of 313,000, the lowest level since October. Economists surveyed by Bloomberg News had expected sales to rise to 325,000. Meanwhile, January’s figures were revised downwards to 318,000 from an initial estimate of 321,000.

After ending the year on a strong note, new home sales figures have been disappointing so far this year, signaling that the housing market may not be stabilizing as quickly as anticipated. This is further indicated by weaker-than-expected February figures for new home starts and existing home sales that were released earlier this week. On the other hand, prices surged to their highest level in eight months, suggesting that builders anticipate more demand in the months ahead. The median sales price climbed more than 8 percent in February to $233,700.

Immediately following the data release, the greenback climbed against most of its major peers. However, market correction on the weaker-than-expected housing data saw the U.S. dollar reverse directions and tumble to trade at levels lower than those seen before the release of the sales figures. At the time of this report, the U.S. dollar had dropped 17 pips against the Australian dollar and was trading around $1.0402.