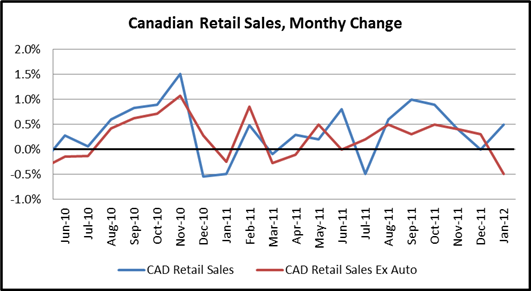 Canadian retail sales rebounded in January after failing to grow for the first time in five months in December, fueled by higher sales in motor vehicle and part dealers and clothing and department stores. Sales in retail stores rose 0.5 percent to a seasonally adjusted C$38.9 billion in the first month of this year, Ottawa-based Statistics Canada reported today. The print was less than a third of economist’s projection of 1.8 percent, according to Bloomberg News survey. Meanwhile, December’s retail sales were revised upward to be flat from a fall of 0.2 percent. The less volatile figure, excluding auto sector, unexpectedly edged down 0.5 percent in January contrast with 0.5 percent increase widely predicted.

Gains were recorded in five of eleven major categories that account for fifty-two percent of total retail sales in January. Sales at motor vehicle and parts dealers surged 3.7 percent, largely attributable to a 4.6 percent mount in new car dealers which was also the highest monthly growth rate in three years. Additionally, higher sales at used car dealers (+2.8%) and automotive parts, accessories and tire stores (+1.8%) contributed to this surge. Besides, sales in department stores surprisingly increased for the first time in five months, up 2.1 percent. Clothing and clothing accessories stores edged up 0.6 percent, led by sales at shoes stores (+4.2 percent). On the other hand, building materials and supplies dealers posted the largest monthly sale decline (-5.2%) contrast to a previous increase of 4.0 percent. Electronics and appliance stores also witnessed a sizable decrease (-3.4%). Sales at food and beverage stores fell 0.9 percent in January on lower sales at super market and grocery stores.

Regarding to region, retail sales climbed in six of thirteen major provinces in January, led by sales in Ontario (+1.5%) due to higher sales of new motor vehicles. Sales in Alberta and British Columbia rebounded 0.6 percent and 0.3 percent in the month, respectively after tumbling in December. On the contrary, Nova Scotia registered the biggest decline of 1.5 percent. 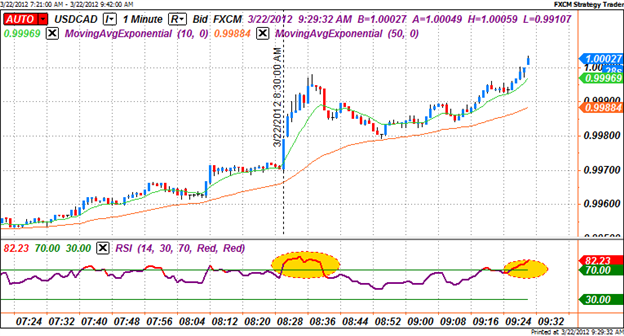 The Canadian dollar was traded mixed ahead North American session today as the loonie strengthens versus high-yielding currencies ( Australian dollar, New Zealand dollar) but weakens versus safe-haven currencies (U.S. dollar, Japanese yen and Swiss franc). In the minutes following the weaker-than-expected retail sales report, the Canadian currency immediately lost grounds versus most of its major counter parts. As can be seen from the 1-minute USDCAD chart above, the USDCAD pair jumped about 30 pips. TheRelative Strength Indicatorcrossing above 70- territory twice signaled that forex trading crowd was aggressively purchasing dollar while selling off loonie. At the time this report was written, the loonie has extended loss against the reserve currency to above parity $C.100023 per U.S. dollar.