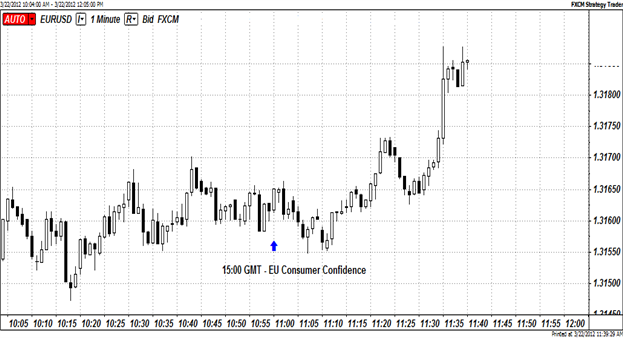 Consumers within the seventeen euro-area countries that use the euro were more upbeat in March, marking three months of improving consumer sentiment and the highest confidence levels since August. The Brussels-based European Commission reported today that the flash consumer confidence indicator in the single-currency region increased to -19.0 in March from -20.3 in the previous month. The March reading beat the median forecast of -19.8, according to a Bloomberg News survey of 31 economists. The better-than-expected reading comes after a second Greek bail-out was approved in February, following months of uncertainty that a Greek debt deal could be reached.

Following the last ECB monetary policy meeting, President Mario Draghi commented that “available survey indicators confirm signs of a stabilization in the euro area economy. However, the economic outlook is still subject to downside risks.” Easing inflationary pressures and some stabilization in financial markets have been factors in the improving consumer sentiment. However, with the recent rise in energy prices, inflation pressures in the euro-zone are unlikely to ease further in the near-term, with Draghi noting upside inflationary risks. Although the improvement in consumer confidence adds to signs that the Eurozone may be stabilizing, consumers remain gloomy on an impending euro-zone recession.

The euro plummeted in early North American morning trade on weaker European manufacturing and purchasing data. However, following the release of the better-than-expected consumer confidence data, the euro pared earlier losses against the U.S. dollar, rallying from $1.3161 to trade at around $1.3195 at the time of this report.