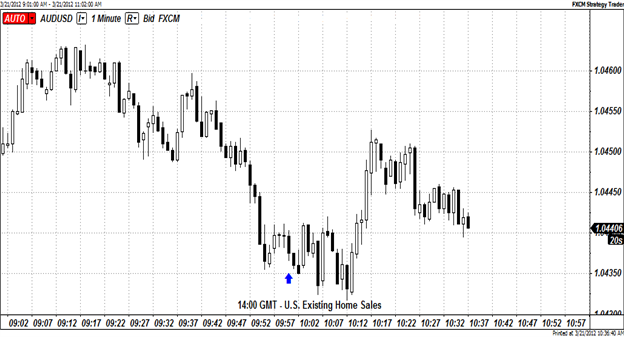 U.S. Existing Home Sales Slip in February But Stronger Than A Year Ago

Sales of previously-owned homes in the U.S. unexpectedly declined in February from an upwardly revised figure in January. However, sales had recovered substantially from a year ago. The National Association of Realtors (NAR) reported today that existing home sales fell 0.9 percent to a seasonally adjusted annual rate of 4.59 million in February from an upwardly revised 4.63 million in January, but had climbed 8.8 percent higher than the 4.22 million figure reported a year ago. The latest reading falls short of the median forecast according to a Bloomberg News survey, which called for a 0.9 percent rise to 4.61 million sales. The upward revision to January’s figures from 4.57 million to 4.63 million brought existing home sales to a 20-month high in January, adding to signs of stabilization in the housing market.

The pickup in the housing market has been boosted by improving labor and wage conditions, rising consumer sentiment and affordability at an all-time high with cheaper home prices and low mortgage rates. NAR chief economist, Lawrence Yun, commented that “the market is trending up unevenly, with record high consumer buying power and sustained job gains giving buyers the confidence they need to get into the market”, further noting that “a pent-up demand could burst forth from the improving economy”.

The month-on-month decline in sales was led by single-family home sales, which slipped 1.0 percent to 4.06 million in February from 4.10 million in January. Meanwhile condominium and co-op sales remained unchanged. House prices were on the rise, with the median existing single-family home price climbing 0.1 percent from a year ago to $157,100 and the median condo price rising by 1.6 percent from a year ago to $153,000. Despite the improving house prices, distressed properties and the threat of more foreclosures may limit the rate of recovery in the housing market.

The U.S. dollar strengthened against most of its major peers in early North American morning trade today as concerns over China’s economy sent investors back to the safe haven currency. However, following release of the existing home sales data, the greenback pared earlier advances as the improving economic data bolstered market confidence and risk appetite. As seen in the 1-minute ADUSD chart above, the U.S. dollar fell by 16 pips against the Australian dollar in the first 15 minutes before retracing slightly to trade at around $1.0441.