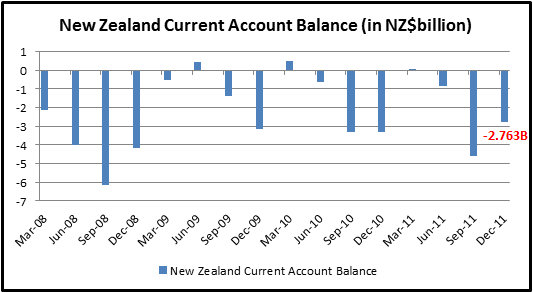 New Zealand’s current-account deficit unexpectedly narrowed in the final quarter of 2011 on record high level of dairy exports and decrease in foreign investors’ earnings. The fourth-quarter deficit shrank to $NZ2.763 billion from a revised $NZ4.751billion in the previous quarter, today’s report showed. The print exceeds consensus forecast of a $NZ2.825 billion shortfall from Bloomberg survey. Meanwhile, the annual current-account gap contracted to $NZ8.3 billion, equivalent to 4.0 percent of gross domestic product (GDP) in the October-December period compared with $8.8 billion, or 4.3 percent of GDP, in the previous three months.

The current account is comprised of transactions in goods and services, current transfers and investment income. New Zealand traded goods surplus unexpectedly jumped to $NZ1.066 billion in the fourth quarter from $NZ0.523 billion in the third quarter. The jump was triggered by record-high value of dairy exports that are resulted from higher output and weaker New Zealand dollar in final three months of last year. Besides, the services deficit narrowed by $NZ84 million to $NZ199 million on increased spending by overseas visitors for the Rugby World Cup. The income deficit fell $138 million to $2.8 billion in the September-December period, mainly on lower dividends from New Zealand shares and profits earned by foreign investors. 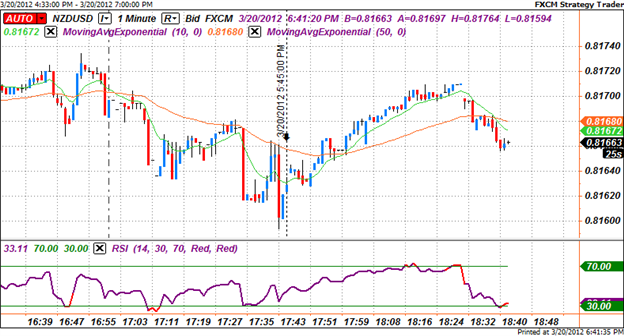 New Zealand currency traded under pressure in early Asian trading session today, following a previous drop in the North American trade after the mining giant BHP Billiton warned of slowdown in China’s economy. In the minutes after the stronger-than-expected current account balance report, the kiwi, a nickname of New Zealand dollar, trim losses versus its major trading partners. As can be seen from the 1-minute NZDUSD chart above, the currency pair hiked approximately 11 pips from 0.8160 to 0.8171 within forty minutes. At the time this report was written, the kiwi saw some correction, traded at $0.8166.