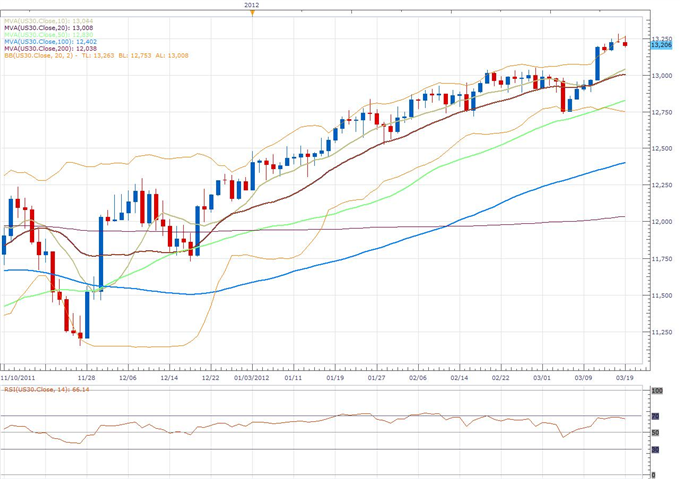 Technical: The market remains exceptionally well bid and while we continue to project a bearish reversal ahead, there is no clear sign of any such development just yet. We had been looking for a break back below the 20-day SMA to confirm our bias but this proved to be a faulty signal and we will now defer to a break below the 100-Day SMA for bearish confirmation. Until then, the uptrend remains intact.

Fundamental: US markets remain well bid on sign that the US is poised to resume its role (for now at least) as the catalyst of global economic growth. The Fed, however, continues to remain hesitant to declare an economic recovery with Fed’s Evans yesterday calling for a third round of quantitative easing and for the Fed to avoid a “premature” rate hike until unemployment falls below 7% or inflation threatens to top 3%. For the time being, then, investors seem poised to continue taking advantage of ultralow rates. 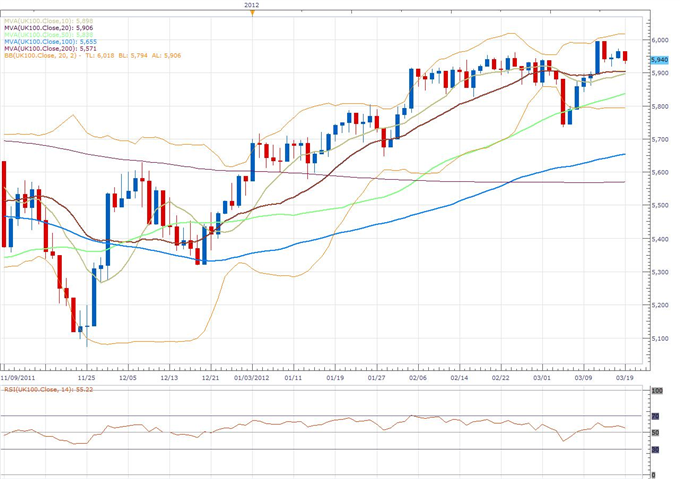 Technical: Although the market has managed to mount an impressive rebound since breaking down from 2012 highs at 5,964, we see any additional rallies as limited, with the greater risk for the formation of an interim top around psychological barriers at 6,000. Look for a break back below 5,900 to help confirm outlook.

Fundamental: Mining companies and banks led a decline in UK stocks today as uncertainly over Exchequer Chancellor Osborne’s budget (set for release this week) kept markets in limbo. As the spat over a possible scrap of the UK’s top tax bracket (50% income tax) continues, Osborne today sought to calm speculation by promising to use the new budget to help lower-income workers. 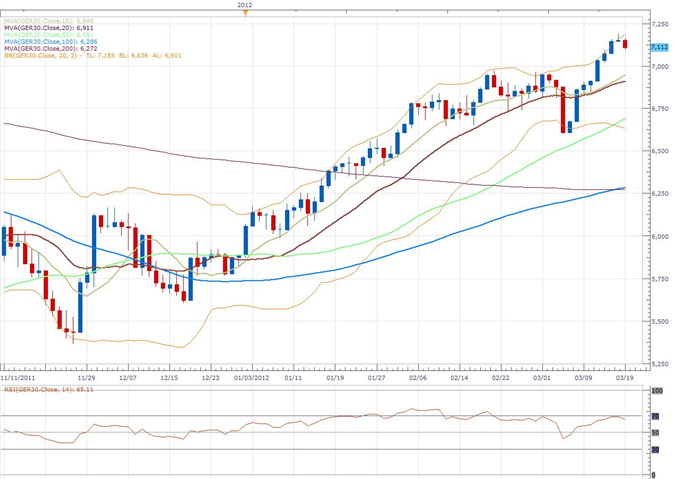 Technical: While the market has managed to post a significant recovery rally and extend gains to fresh 2012 highs, we still see the prospects for recent rallies beyond 7,000 as limited with the greater risk for the formation of a medium-term top in favor of a deeper decline over the coming weeks. Look for a break and close back under 7,000 to confirm and accelerate.

Fundamental: European stocks declined today after a sharp weekly advance last week. The move was attributed to market consolidation. An IMF report released over the weekend said that without official support and access to ECB funding, a disorderly Greek exit from the Euro-area would have been unavoidable. The report comes amid speculation that the recent Greek deal has merely delayed the inevitable; a Pimco executive today said he expects Portugal to become a “second Greece” in the near future. 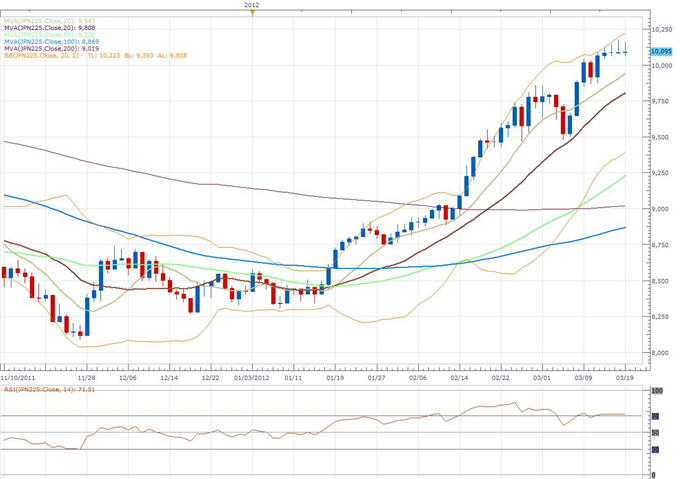 Fundamental: The Japanese Nikkei 225 Stock Average recorded its highest close since the March 2011 earthquake. The yen took gains against the euro and the dollar on speculation it had excessively dropped recently. The Yen’s strength translated to a consolidation of recent sharp gains in Japanese equities and the market seems poised for a healthy pullback before resuming further gains as the Bank of Japan encourages the outlook of exporters. 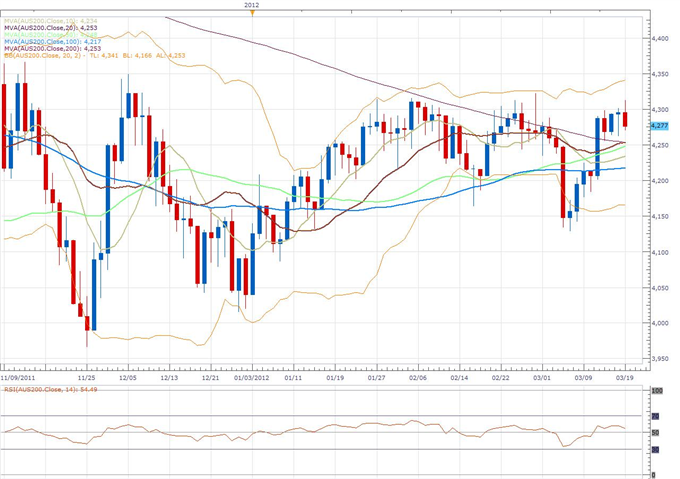 Fundamental: The RBA’s Stevens today said he sees China’s GDP surpassing Europe and matching that of the US in a decade. The comments boosted confidence in the Australian dollar, which is closely correlated to the Chinese economy, and sent the Aussie to a 10-month high versus the Yen. The gains in the Australian dollar were not yet reflected in Aussie equity markets, which saw losses today after recent gains.