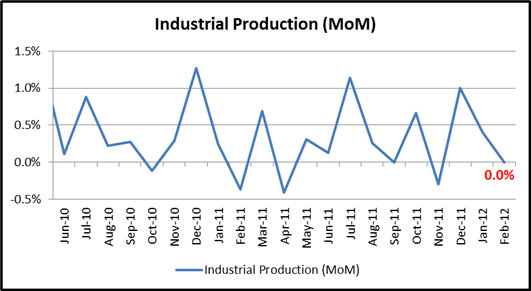 THE TAKEAWAY: U.S. Industrial Production was Unchanged in January> Increase in Factory Production was Offset by Decline in Mining Output>U.S. Dollar Extends Loss

Industrial production in the United States unexpectedly came in flatted in February, pointing to slower manufacturing and a decline in mining output. The reading falls short of consensus forecast as eighty-one economists polled by Bloomberg survey had called for an increase of 0.4 percent. Meanwhile, January total industrial production has advanced 0.4 percent compared with no gain (+0.0%) initially reported. The noticeably upward revision resulted from higher output in various manufacturing industries. Besides, capacity utilization rate decreased 1.2 percentage points to 78.7 percent in February, 1.6 percentage points lower than its long-run average from 1972 to 2011.

Manufacturing output, which accounts for more than 70 percent of industrial productions, rose 0.3 percent in February, following a 1.1 percent jump in the previous month. Despite a decrease in the index for motor vehicles and parts (-1.1%), an increase in the index for manufacturing excluding motor vehicles and parts (+0.4%) led to the gain in factory production. In contrast, February production at mines fell for the second straight month, down 1.2 percent, after having retreated 1.6 percent in January. The output of utilities unchanged last month after having dropped 2.2 percent in January as temperatures in February stayed mild following an unseasonably warm January.

In terms of market groups, the production of consumer goods was unchanged in February since falls in consumer durable goods output offset gains in non-durable goods output. The production of business equipment rose 0.6 percent from prior month and advanced 10.8 percent from a year earlier with appreciable increase in all major component indexes including transit (+0.9%), information process (+1.0%) and industrial equipment (+0.2%). On the contrary, the output of materials to be further processed in the industrial sector fall 0.3 percent in the month. 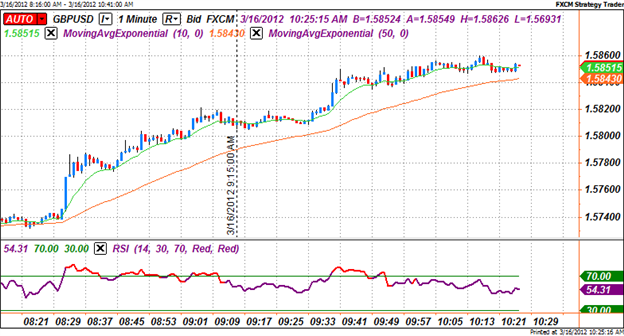 The U.S. dollar weakened versus most of its major peers following the Consumer Price Index report issued at 8:30 A.M EST today. The reserve currency has extended its loss against major currencies after the industrial production reading came in weaker than expected. As can be seen from the 1-minute GBPUSD chart above, the GBPUSD hiked nearly 50 pips from 1.5810 to 1.5860 within an hour. At the time this report was written, the British pound traded at $1.5681 and stayed above its 10-minute exponential moving average (EMA) line (the orange line) and close to its 50-minute EMA line (the green line).