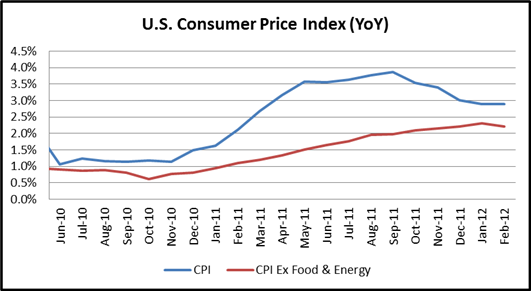 THE TAKEAWAY: U.S. Consumer Price Index Rose 0.4 percent in February> A Jump in Gasoline Price Accounted for Over 80 Percent of Change in All Items Index > U.S. Dollar Slip vs. its Major Peers

U.S. inflation rose the most in 10 months in February on recent rises in energy costs, consistent with Fed Chairman Ben Bernanke’s statement at a congressional panel on Wednesday that rising gasoline prices will create “temporary jump” in inflation while reducing American’s purchasing power. The seasonally adjusted consumer price index for all urban consumers rose 0.4 percent last months, the U.S. Bureau of Labor Statistics reported today. The reading matched consensus forecast from Bloomberg News survey. Over the last twelve month, the index edged up 2.9 percent. The less volatile figures which exclude food and energy rose 0.1 percent on a monthly basis and 2.2 percent on a yearly basis, in line with economists’ expectations. Since inflation outside of food and energy is slowing, inflationary pressures in the U.S. economy remains subdued.

A surge in the cost of living in the U.S. in February was mainly attributable to a jump in gasoline. The gasoline index sharply mounted last month, accounting for more than 80 percent of the change in all items index. Despite a fall in natural gas price (-9.8%), the gasoline increase (+12.6%) pushed the energy index 3.2 percent higher. Meanwhile, the food index remained unchanged in February, with the food at home index having been flat for the second straight month. Besides, the indexes for new vehicles, medical care and household furnishings and operations all advanced while index for apparel, recreation, used cars and trucks, and tobacco all declined. 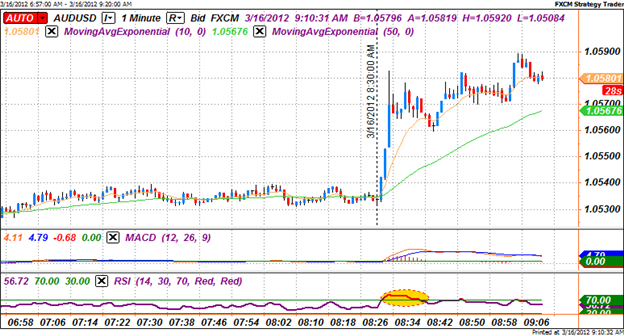 In the minutes following the Consumer Price Index report, the U.S. dollar loses its footing versus most of its major trading partners. As can be seen from the 1-minute AUDUSD chart above, the currency pair immediately jumped approximately 60 pips from 1.0530 to 1.0590 within thirty minutes. TheRelative Strength Indicatorcrossing above 70-level, an overbought territory, indicated that forex trading crowd aggressively buy in Australian currency while reducing their greenback holdings. At the time this report was written, the reserve currency tumbled 0.46 percent versus the aussie, trades at A$0.9454.