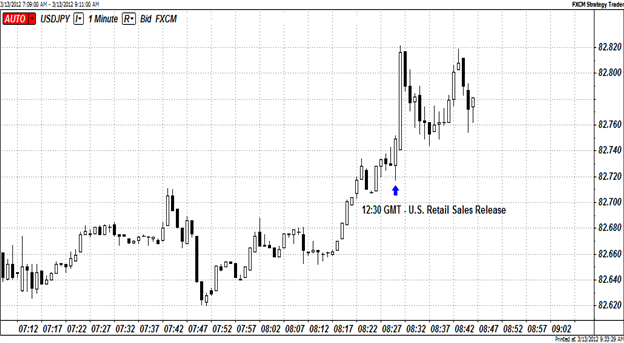 USD Climbs as U.S. Retail Sales Grows in February By Most in Five Months

The U.S. Consensus Bureau released its February Advance Monthly Retail Trade Report today ahead of the Federal Reserve’s rate decision later this afternoon. The report revealed that retail sales in the U.S. rose in February by the most in five months, rising by 1.1 percent to match the median forecast of 81 economists polled in a Bloomberg News survey. January’s estimate was revised upwards to 0.6 percent from 0.4 percent.

Retail demand improved in 11 of 13 industry categories, led by sales in clothing (1.8 percent) and auto (1.6 percent). Meanwhile, sales at gasoline stations jumped by 3.3 percent, reflecting rising gasoline costs. The pickup in retail sales indicates growing consumer confidence as the labor market continues to improve and recovery of the U.S. economy gathers pace. The unemployment rate has dropped to its three-year low of 8.3 percent, while job growth has continued to increase. However, in his address to Congress on March 1, 2012, the Federal Reserve’s Chairman Bernanke cautioned that the rise in gasoline prices ‘is likely to push up inflation temporarily while reducing consumers’ purchasing power’, which could stem the pace of retail sales growth in coming months.

Immediately after the data release, the greenback strengthened against most major currencies on the positive retail sales figures. The U.S. dollar jumped by 10 pips against the Japanese yen to 82.82 yen to the dollar before retracing slightly. At the time of this report, the USDJPY pair was trading slightly higher at around 82.76.