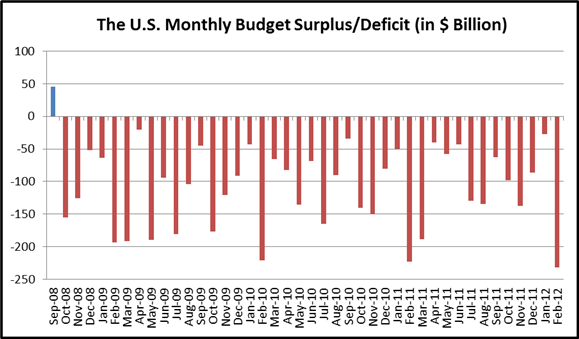 U.S. budget deficit climbed to the highest monthly level in history last month, making the fiscal year 2012 shortfall more than half of trillion dollars. The imbalance surged to $231.7 billion in February from $27.4billion in the previous month, the monthly budget statement showed today. The reading is worse than expected as economists surveyed by Bloomberg News widely predicted a shortfall of $229 billion. The last time the U.S. reported budget surplus was September 2008. The gap between spending and revenue substantially widened last month as a result of rising outlays and declining receipts. February receipts sharply dropped to $103.413 billion from $234.319 billion previously reported while outlays climbed to $335.096 from $261.731 billion.

U.S. government ran its 41th straight monthly budget deficit in February, and the imbalance is on track to surpass $1 trillion for the fourth straight year. The White House last month projected a deficit of $1.33 trillion in the fiscal year ending on September 30. that is higher than $1.29 trillion last year. The historically high debt figure today screams for the leaders to take serious action to balance the budget. Standard and Poor’s for the first time downgraded the U.S.‘s AAA credit rating one note to AA+ in August 2011 mostly due to the lawmakers’ failure in reducing the more than $1 trillion budget deficit. The rating is threatened to be cut to AA within two years if budget deficit continues to be higher than agreed to. Inevitably, debt control will be the central issue of this year’s presidential election. 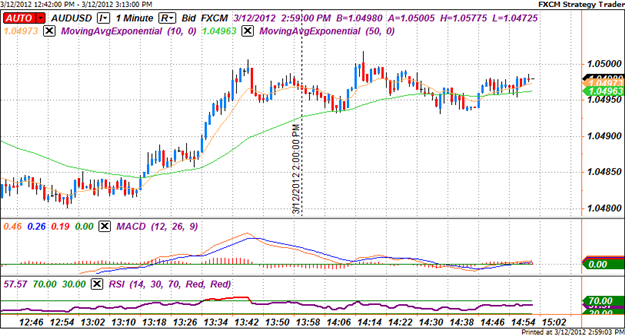 Market participants showed fairly muted reactions regarding to the greenback following the monthly budget statement. As can be seen from the one-minute AUDUSD chart above, the currency pair traded in the tight range between 1.0492 and 1.0500. The Relative Strength Indicatorlying between 30- and 70- level indicated neither overbought nor oversold reaction.