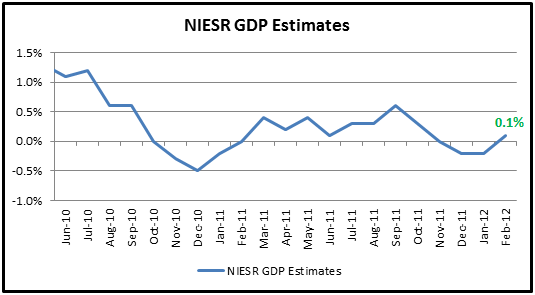 THE TAKEAWAY: UK Gross Domestic Product to Expand at Lower Pace> Speculation on Further Quantitative Easing in May was Dampened > the Sterling Extends Loss

The report issued by National Institute of Economic and Social Research (NIESR) today showed that U.K. economy might expand in three months ending in February, dampening speculation on further quantitative easing in May. U.K. Gross Domestic Product was forecasted to grow by 0.1 percent in the quarter through February, after consecutively contracting 0.2 percent in the quarter through January and in the quarter through December. Though the recession is reported to be over, period of depression is “likely to continue for some time”. The research organization also projected that “the UK’s economic recovery to take hold in 2013” and the output is “unlikely to pass its peak in early 2008 until 2014”.

The NIESR employs statistical projection techniques, thus its estimates are very close to those for official GDPnumbers. The independent research organization is predicting that U.K. economy resumed growth in the quarter ending in February as gains in industry and construction outputs far more offset declines in agriculture products. Industry output probably increased 1.3 percent while construction output might edge up 0.2 percent. In contrast, agriculture production was estimated to drop 2.5 percent to the lowest level in nine months. Besides, output in private sector is estimated to rise 0.4 percent while output in public services might fall 0.2 percent.

The latest official figure showed that GDP in United Kingdom shrank 0.2 percent in the last three month of 2011. The fourth quarter decline prompted the BOE policy makers to inject a further 50 billion pounds into the economy in February to stimulate growth. At its monthly policy meeting yesterday, the Bank of England held target rates steady at 0.5 percent and keeps its level of asset purchases at 325 billion pounds amid signs the economy avoided another recession. It is evident that the better near-term growth outlook and downward pressure from economic slack will reduce bet on further quantitative easing in May. 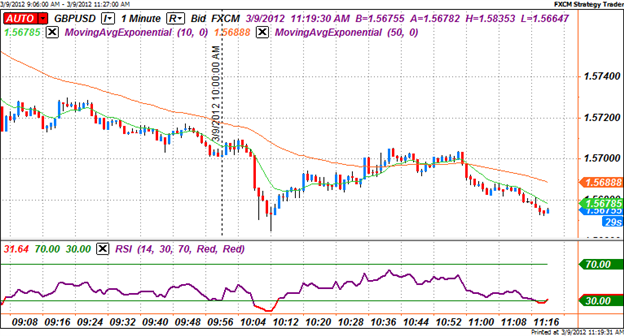 British pound lose its footing against U.S. dollar and higher-yielding currencies in North American morning trade today after the Greece pushed through the biggest sovereign restructuring in history, dampening demand for assets linked to European growth. In the minutes after the NIESR Gross Domestic Product report, the sterling extends loss versus the greenback. As can be seen from the 1-minute GBPUSD chart above, the currency pair fell nearly 20 pips from 1.5703 to 1.5753. At the time this report was written, the sterling traded at $1.5678.