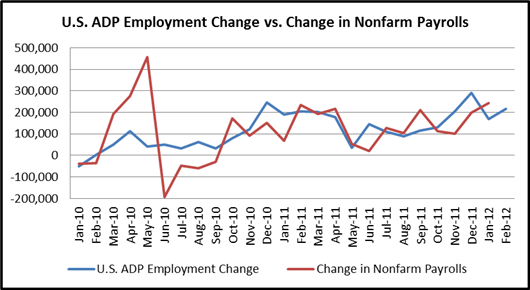 Job creation in the private sector gathered pace in February after slowing somewhat in the previous month, pointing to positive developments in the U.S. labor market in year 2012. The monthly ADP National Employment report issued today showed that U.S. companies added 216 thousand jobs last month, following a revised 173 thousand gain in January and 292 thousand increase in December. The print is slightly higher than expected as forty-four economists survey by Bloomberg News had predicted a gain of 215 thousand. This is also better than monthly employment average of 200 thousand in last five months. January’s reading was upwardly revised to a gain of 173 thousand from 170 thousand initially reported. As the ADP employment change is considered a precursor to the non-farm payrolls number, a favorable figure today raised hope that non-farm payrolls reading released this Friday might meet or beat expectations as well.

Job growth was widespread in most of private firms in February, led by service-producing companies. Service producers generated 170 thousand jobs, following 149 jobs added in January and 225 jobs created in December. Employment in the construction industry grew by 16 thousand, marking the fifth consecutive gain in this sector. Meanwhile, employment in the financial services sector increased 14 thousand in the month, the largest monthly gain over the last two years. Employment in manufacturing accelerated in February, as did good-producing sector. Factories added 21 thousand jobs compared to 16 thousand in January while goods producers hired 46 thousand more employees in the month, nearly double the number added in December, 2011. 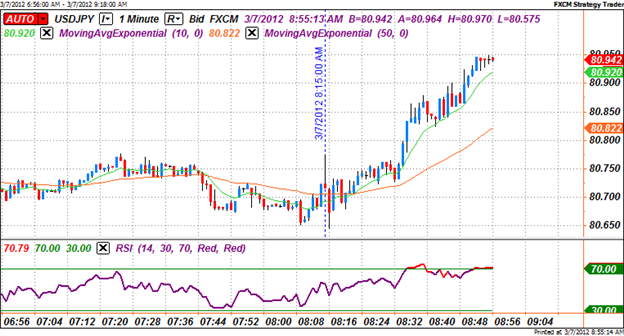 The U.S. dollar falls versus most of its major counterparts except its Japanese trading partners ahead of the North American trade today. In the minutes following the ADP employment report, the dollar continued to weaken versus other currencies but Japanese yen. As can be seen from 1-minute USD/JPY chart above, the reserve currency extends gain against the yen by 30 pips from 80.65 to 80.94 after the ADP report. Market participants have expected the positive nonfarm payroll data and unemployment rate released this Friday and the favorable reading would dampen speculation of another round of quantitative easing that somewhat support the greenback. Unemployment rate hit three-year low of 8.3 percent in January as payrolls surged 257 thousand. Economists projected that 225 thousand nonfarm payrolls added last month will help maintain the unemployment rate at 8.3 percent.