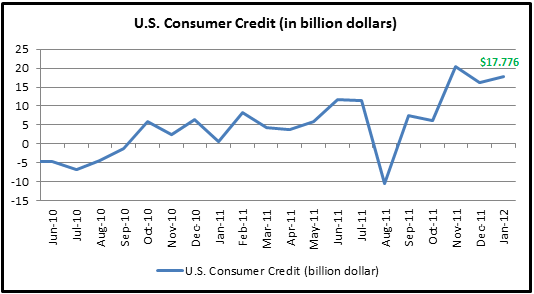 U.S. consumer debt sharply rose in January, a positive sign of economic growth and recovery in the U.S. as demand on car and student loans increased. The Federal Reserve reported today that the total of all consumer credit outstanding grew $17.776 billion, or 8.6 percent at annual rate, in January following a revised $16.268 gain in December and a $20.375 billion peak in November. The print is well above consensus forecast as thirty-eight economists surveyed by Bloomberg News had predicted a modest rise of $10.450 billion. Projections were fairly divergent, ranging from a fall of $5 billion to a gain of $20 billion.

Consumer credit climbed more than forecast in January as surge in non-revolving credit far more offset decline in revolving credit. Non-revolving credit, including student loans, car loans and loans for mobile homes, advanced 14.7 percent at annual rate to $1711.4 billion in January, the biggest monthly increase since November 2011. Improving labor market condition coupled with increasing pay rate boosted demand on autos. Auto sector posted another strong month for car sales in January, with 14.1 million annual rate cars sold. Besides, demand on student loans picked up as more students are of college-going aged and more unemployed Americans headed back to school but do not have cash on hand to pay for school, given slow economic recovery and rising tuition cost. In contrast, revolving credit, which mostly measures credit card use, retreated 4.4 percent to $800.9 billion. This is also the first decrease in spending on credit cards since August. 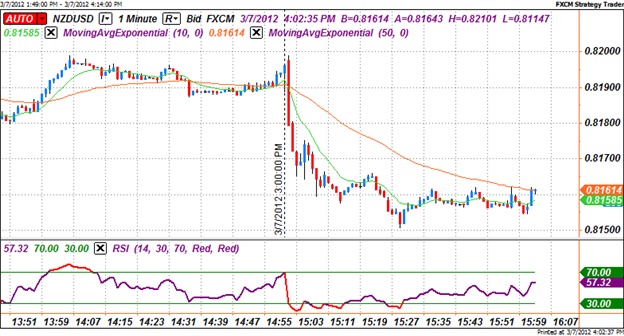 The greenback continued to trade under pressure versus most of its major currencies but pared loss against the New Zealand dollar since the announcement of Reserve Bank of New Zealand’s interest rate decision released at the same time with the U.S. consumer credit report (3:00 P.M. EST) significantly move the market. Explaining for holding Official Cash Rate steady at 2.5 percent, the Reserve Bank Governor Allan Bollard expressed his concern over the “above fair value” currency that weigh on tradable sector, tourism and economic growth. Inevitably, strong New Zealand currency coupled with slowing global recover will keep interest rate lower for longer. As can be seen from the 1-minute chart above, the NZDUSD pair slipped approximately 50 pips from 0.8200 to 0.8150. The Relative Strength Indicator crossing below the 30-level indicated that currency traders was massive selling the kiwi, the nickname of New Zealand currency, in favor of the greenback. At the time this report was written, the kiwi trims gain by 0.47 percent versus the reserve currency, trades at $0.81614.