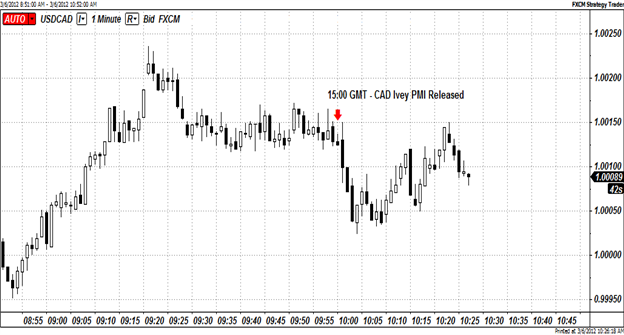 Canada’s Ivey Purchasing Managers Index (PMI) exceeded forecasts as it unexpectedly climbed to a nine-month high in January, indicating an accelerating rate of purchasing activity in the Canadian economy. The headline Ivey PMI, a leading indicator used to measure business optimism and forecast economic growth, registered 66.5 on a seasonally adjusted basis in February, rising from 64.1 in January. According to a Bloomberg News survey, economists had forecast a reading of 62.0. Readings over 50 signify expansion while values under 50 indicate contraction.

According to a report released jointly by the Purchasing Management Association of Canada and the Richard Ivey School of Business, the Ivey Employment Index rose to 58.8 from 55.2 and the Supplier Deliveries Index climbed to 48.8 from 41.9, indicating improvements in the labor market and deliveries from the previous month. The Price Index jumped to 73.1 from 65.0, due largely to expansions in Canada’s manufacturing and export industries as the U.S. economic recovery gathers pace. Furthermore, price pressures continued to rise as a result of persistent strength of the Canadian dollar. In contrast, inventories continued to trend lower, dropping to 54.9 from 57.0 in the previous month.

In the minutes after the data release, the loonie strengthened against the greenback, gaining 13 pips before retracing slightly. Trading of the Canadian dollar was mixed in early North American trading today, as it strengthened against high-yielding currencies (Australian dollar and New Zealand dollar), but weakened against safe-haven currencies such as the U.S. dollar and Japanese yen, amid growing concerns of a slowdown in global growth and renewed euro-area worries two day before a critical deadline in the Greek debt crisis. At the time of this report, the loonie had pared some of its earlier losses and the USDEUR pair was trading around $1.0005.