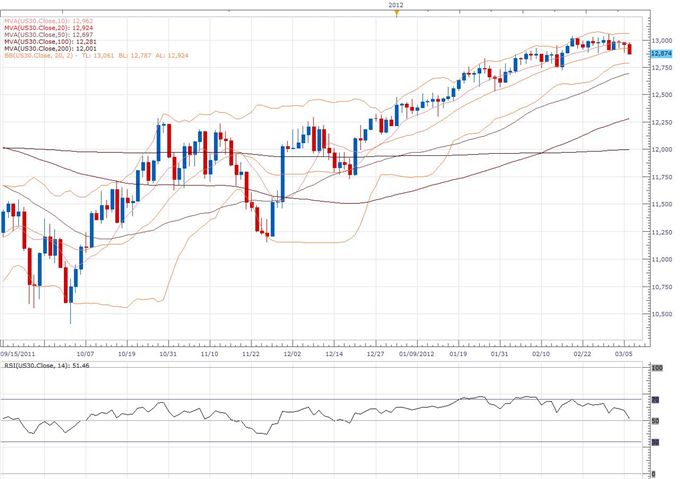 Technical: Although the market has been very well bid in recent weeks, we are starting to see signs of exhaustion and will be looking for a pullback over the coming sessions. The key indicator to watch is the 20-Day SMA, and a break and close below will be used as confirmation for the onset of some bearish price action likely to result in a period of multi-day selling. Inability to close below the 20-day however will keep the bullish structure intact.

Fundamental: US equity futures took a hit today as it was revealed that the European economy shrank some 0.3 percent in 2011’s fourth quarter. The news was in line with expectations, but that didn’t stop Dow Jones futures from losing 84 points, or 0.7 percent in London trade today. China yesterday cut its economic growth target, and orders to American factories decreased for the first time in three months. 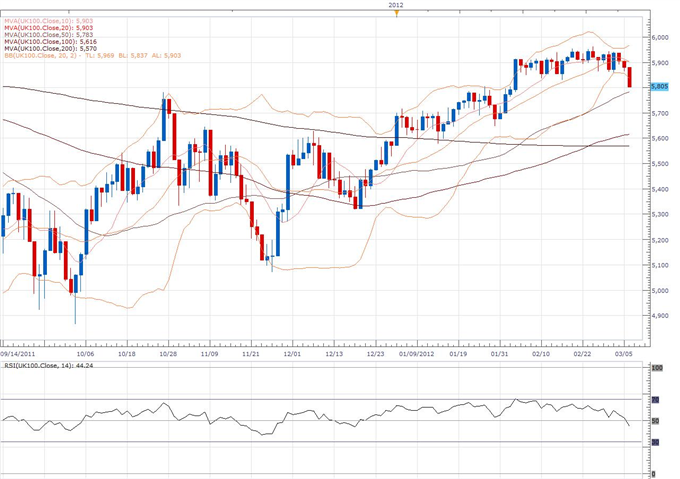 Technical: The latest close below the 20-Day SMA is significant here and could now trigger a healthy and needed pullback in this market. Look for a break below 5,829 to confirm and accelerate declines towards 5,650 over the coming sessions. Back above 6,000 negates and gives reason for pause.

Fundamental: UK stocks took a hit today as weak Chinese growth forecasts, underperformance in US factory orders, and concerns over a possible delay in Greek PSI developments weighed on market sentiment. Market players are anxiously waiting to see if Greece will get the support it needs from its private creditors to proceed with the European debt swap. Meanwhile, UK retail sales fell for a second month in February as a drop in purchases of clothing countered gains at food stores. 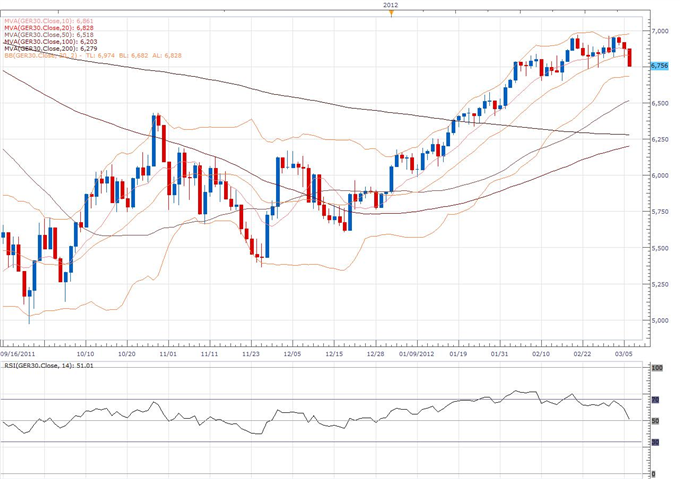 Fundamental: The expected contraction of the Euro zone economy by some 0.3% was confirmed today, sparking a fresh wave of risk aversion which saw European markets take a tumble. Also serving to bolster a bearish outlook were new speculations that Greece will be unable to complete the debt swap agreed upon with Europe. News today emerged that the private investors who have already agreed to participate in the swap hold about 20% of Greek debt. Greece is now thought to be considering delaying its PSI deadline until next Wednesday from this Thursday. 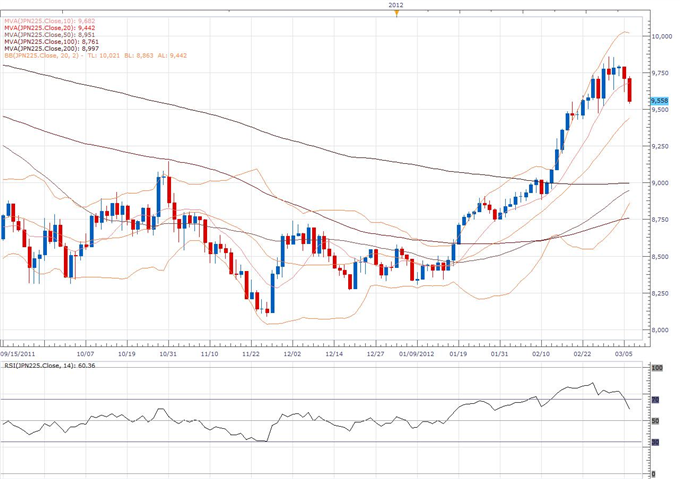 Technical: Daily studies are finally starting to correct from violently overbought levels and we would recommend that bulls proceed with caution over the coming days. From here, short-term risks are tilted to the downside so that technical studies can unwind from these overextended readings. Look for a pullback towards the previous resistance now turned support by the 200-Day SMA in the 9,000 area before considering possibility of a bullish resumption. Last Wednesday’s high by 9,863 could now represent a meaningful short-term top.

Fundamental:A strengthening Yen has served to reduce Japanese exporters’ outlooks as the nation’s energy companies are start to feel the impact of rising oil prices. Moreover, China’s shift away from exports and investment has weighed on Japanese shipping companies and machinery makers. 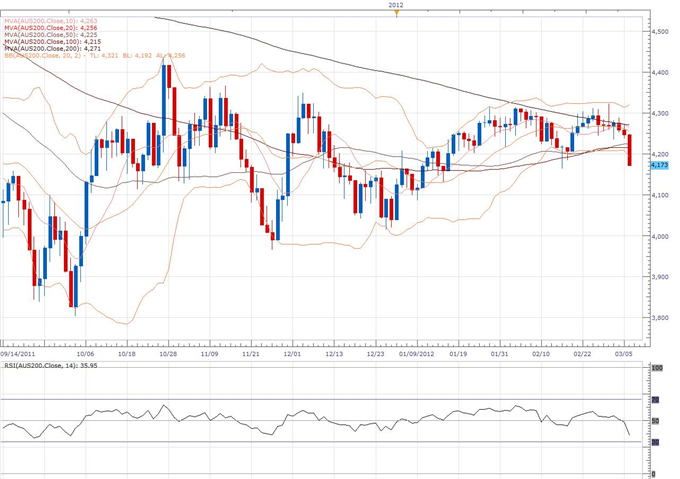 Technical: Rallies have been well capped above 4,300 as we had anticipated and the market is in the process of rolling back over in favor of a bearish decline towards 4,165. A break below 4,165 will then accelerate setbacks and expose 4,100 and the 4,000 further down. Ultimately, only a daily close back above 4,315 gives reason for pause.

Fundamental: The RBA’s decision to keep interest rates unchanged, instead of adopting a more accommodative stance in the face of the global economic cool down, was thought to be influencing the large drops seen here today. RBA officials left open the door for the possibility of a cut in rates in the near future. Elsewhere, Australia’s government commodity forecaster today mentioned that wheat crops worldwide will probably decline 2 percent in the year starting July 1, as yields return to average after this seasons’ record production.