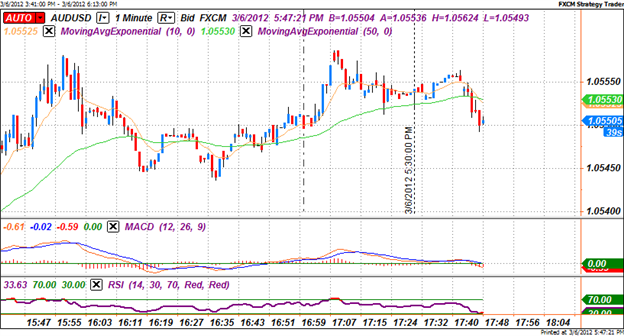 The latest Australian PCI numbers came in today, showing a further contraction in the Australian Housing Industry as the latest reading of 35.6 remained below the key 50 level for the 20th consecutive month. The print declined in February which is a testament to the fact the Australian residential housing sector is still very weak. Despite the figures still showing contraction, the level of such contraction has been gradually improving over the last few months, hinting that the sector is crawling its way towards recovery.

The Aussie Dollar slipsin the minutes following the release, continuing the 300+ pip decline it has seen since March 2nd. Regardless, the currency did not move drastically on the news, due to the fact that is not a widely watched economic indicator. At the time this report was written, the Australian currency weakened 0.05 percent against the U.S. dollar, traded at $1.0550. Because of the small population of Australia relative to the vast mineral wealth, the housing sector is not necessarily holding back recovery as it is in the United States and therefore the report is not a hugely important economic indicator. Although the index should recover as the economy does, in the case of Australia it is more of a lagging indicator, whereas in the US, it is considered leading. Because of this, a long-term Australian economic recovery is more reliant on global demand for commodities and, when demand finally recovers, we can expect to see the Australian dollar appreciate. However, in the short to medium term, turmoil in risk currencies prompts investors hunting for the safe-haven currencies such as U.S. dollar, Japanese Yen, thus the Aussie dollar should continue to depreciate.