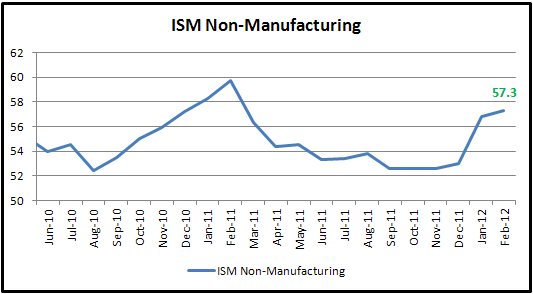 New orders placed with American factories retreated in January, snapping three consecutive monthly increases, as businesses sharply cut their investment in machinery and other core capital goods in the first month of 2012. A report issued by Commerce Department today showed that factory orders declined 1.0 percent in January in contrast to a revised 1.4 percent gain in the previous month. The print, however, top median estimates as economists surveyed by Bloomberg News had called for a further fall of 1.5 percent. A fall in January factory orders is considered the typical pattern of declines in first month of the quarter. Despite of the fall, new orders have been on rising trend since March 2009.

Separately, the Non-manufacturing Institute of Supply Management (ISM) report on business issued at the same time showed that economic activity in the non-manufacturing sector expanded in February at the fastest rate since March 2011. The ISM index of non-manufacturing industries surprisingly rose to 57.3 percent in February from 56.8 percent a month earlier amid consensus forecast of 56 percent. Readings above 50 indicate expansion, thus this was the 26th consecutive month of expansion in non-manufacturing sector. The business activity index, which is considered the most important in 10 indexes reported, was accelerated 3.1 percent to 62.6 percent last month, reflecting improved economic environment. New orders advanced 1.8 percent to 61.2 percent on “expansion of business” and “to meet new forecast by sales for spring”, commented respondents. The price index surged 4.9 percent to 68.4 percent, pointing to higher price pressure in fourteen industries than the previous month, especially in construction, mining, wholesale trades, retail trade and educational service. On the other hand, employment activity in the non-manufacturing sector grew in February at slower rate with the employment index falling 1.7 percent to 55.7 percent. This corresponds with respondents’ comment that “while higher, employment growth is leveling off”. 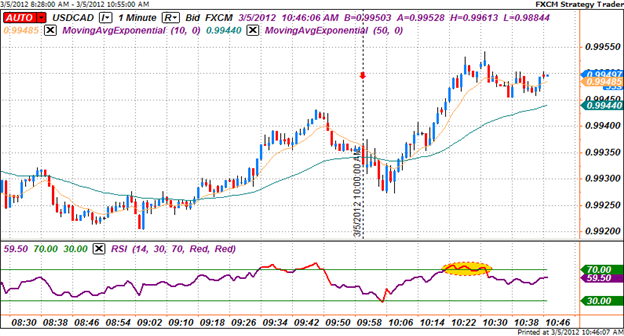 Market participants showed mixed reactions regarding to the dollar minutes following the Factory Orders and ISM Non-manufacturing reports released at 10:00 A.M. Eastern Time. The reserve currency gained ground versus commodity-related and higher-yielding currencies but lose its footings against euro, Japanese yen and Swiss franc. As can be seen from the 1-minute USD/CAD chart above, the greenback extends gains versus the loonie by approximately 25 pips from 0.9930 to 0.9955 within thirty minutes. The Relative Strength Indicator crossing above the 70-level indicated that currency traders was massively purchasing the U.S. dollar while selling loonie. At the time this report was written, U.S. dollar strengthens 0.45 percent against the Canadian currency, trades at C$0.9949.