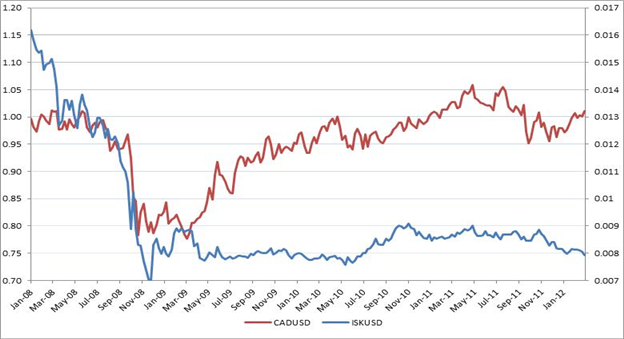 Canadian Economy Could Benefit If Iceland Adopts the Loonie

THE TAKEAWAY: [Iceland looks to adopt the Canadian dollar] > [Canada could benefit from trade opportunities, oil and gas reserves in the Arctic] > [Canadian economy to strengthen]

In 2008, Iceland’s economy fell into turmoil following the devastating collapse of three of its major banks. In the ensuing financial crisis, Iceland’s currency (the krona) depreciated sharply by a staggering 92 percent from its 2007, the market capitalization of the nation’s stock market collapsed more than 90 percent, and the country itself plunged into a deep economic recession with the nation’s real GDP falling by 5.5 percent in the first half of 2010.

More than three years on, Iceland’s economy is showing signs of recovery, though it continues to struggle with economic volatility and stifling capital controls. Furthermore, fears persist of a return to wild fluctuations when those controls are lifted next year. In looking for solutions to stabilize its economy, Iceland is now considering options such as pegging the krona to another currency like the euro or U.S. dollar, or unilaterally adopting another country’s currency. In particular, Iceland is now looking at the possibility of giving up the krona to adopt the Canadian dollar. Such a move would result in Iceland forfeiting control over their monetary policy, as the Bank of Canada would continue to make its decisions based on the interests of the Canadian economy, and leave the country with few options to counter domestic financial shocks. Obviously, the changeover would not be easy and Iceland would need very strong reserves to complete the operation, which could require an extensive transition period when both currencies are in circulation.

Nonetheless, the advantages that the Icelandic economy stands to gain would likely outweigh these risks. Adopting the Canadian dollar would provide the country with a stable, liquid currency that roughly tracks global commodity prices. This aligns well with Iceland’s commodity-heavy economy, which is influenced heavily by fish and aluminum exports. Furthermore, the strict currency controls that have been in place since the banking sector collapse include severe capping on foreign exchange transactions that prevent foreign investors from repatriating their profits, making Iceland unattractive to foreign businesses. The stability and liquidity of the loonie will theoretically shield the Icelandic economy against extreme volatility once these controls are lifted.

From Canada’s perspective, the Canadian economy could benefit considerably if Iceland were to adopt the Canadian currency. Firstly, this would open trade opportunities between the two countries - particularly for Canadian shipping companies, fish exporters, banks, insurers and, eventually, oil distributors and service companies. Secondly and more significantly, this would enhance Canada’s geopolitical influence in the Arctic region, which still holds enormous economic potential in untapped oil and gas, and minerals reserves. The Arctic region holds an estimated 22 percent of the world’s remaining conventional oil and gas reserves. As a commodities-dependent nation and a global player in the oil and gas sector, this could be enough for the Canadian government to leave itself open to the possibility of embracing Iceland into its currency folds.