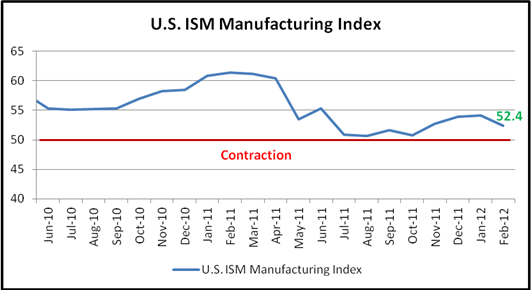 Manufacturing in the U.S. expanded less than projected in February as businesses were expected to hold steady and concern over commodity prices heightened. The Institute for Supply Manager’s (ISM) Manufacturing index, which tracks the amount of manufacturing activity that occurred in the previous month, unexpectedly falls 1.7 percent to 52.4 percent in February from 54.1 percent in January. The reading missed miss median forecast as economists polled by Bloomberg survey had anticipated a print of 54.5. The index has stayed above 50-level for thirty-first consecutive month, indicating sustainable growth in the manufacturing sector of the world’s largest economy. The annualized PMI for February corresponded to 3.3 percent increase in real gross domestic product (GDP) annually.

The index takes into account expectations for future production, new orders, inventories and employment deliveries. Production index registered 55.3 percent in February compared to 55.7 percent in January. Besides, new orders pointed to slow growth with a sub-index falling 2.7 percent to 54.9 percent last month from 57.6 in January. Expansion in employment also slowed 1.1 percentage points to 53.2 percent in the month. The increase in hiring for the 29th consecutive month is consistent with an increase in the Bureau of Labor Statistics data on manufacturing employment, though “still far from normal level”. Meanwhile, inventories contracted at the same pace of January.

ISM Prices Index, which reflects business sentiment regarding future inflation, came in at 61.5, well above consensus estimate of 58.0. The print is 6 percentage points higher than the 55.5 percent in January. This marks the second straight month of price hike in raw materials since September 2011. Price pressures were elevated in thirteen of eighteen manufacturing industries during the month of February, particularly high for mineral products, fabricated metal products, plastic and rubber products, primary metals and machinery. 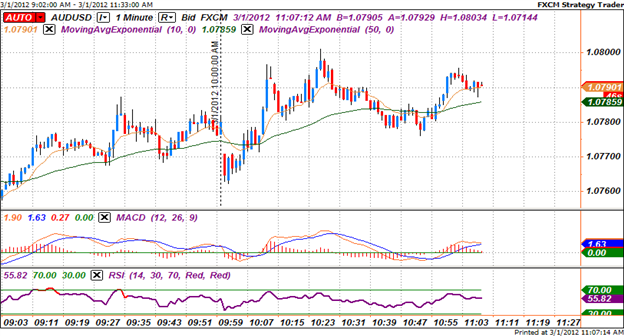 U.S. dollar tumbled versus most of its major trading partners except its euro and Swiss franc counterparts in North American morning trade today. The dollar extends loss against major currencies after the ISM report showed weaker-than-expected growth in the U.S manufacturing sector. As can be seen from the 1-minute AUD/USD chart above, the currency pair climbed nearly 20 pips from 1.0762 to 1.0800 following the dismal manufacturing report. At the time this report was written, the aussie was traded at $1.0791