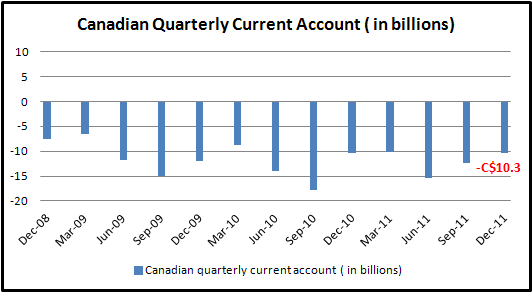 THE TAKEAWAY: Canadian Current Account Deficit Narrowed in the Third Quarter> Traded Goods Surplus Widened > Canadian Dollar Strengthens vs. Most of its Counterparts

Canadian current account deficit narrowed in the final quarter of last year on higher export, Statistics Canada reported today. The fourth-quarter seasonally adjusted deficit shrank 16 percent to $10.3 billion from a revised C$12.3 billion in the third quarter. The reading, however, missed consensus forecast from Bloomberg survey as economists widely expected a shortfall of C$9.4 billion. Canada’s balance of international payments (BoP) account keeps being deficit since the fourth quarter of 2008 as weak global demand and currency appreciation have dampened the nation’s exporting activities.

The current account comprised transaction in goods, services, investment income and current transfer. Traded goods surplus unexpectedly jumped to C$3.13 in the fourth quarter 2011 from C$248million in the previous quarter as export of goods soared C$6.68 billion to C$121.47 billion, the highest level since the third quarter of 2008. In contrast, the services deficit in last quarter widened C$60 million to C$6.16 billion due to contracted commercial service surplus and widened transportation deficit. 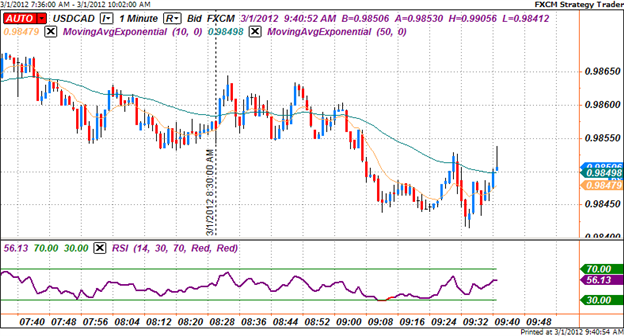 Canada currency strengthens versus most of its major peer for the second day today and advanced against its U.S. counterpart for a fourth day, the longest string in more than a month, amid uneven broader rally in riskier assets and higher-yielding currencies. The minutes following the current account report, the Canadian dollar extended gains versus the reserve currency by approximately 20 pips. At the time this report was written, the loonie appreciated 0.45 percent versus the greenback, traded above parity at $1.0148.