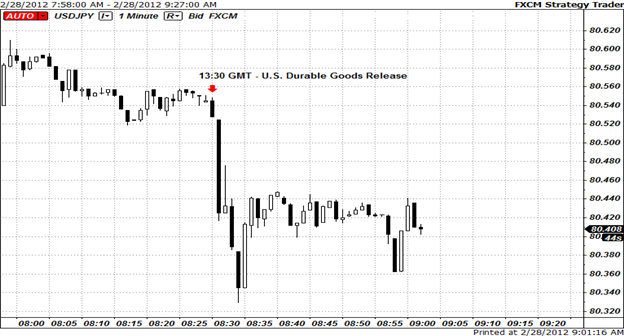 U.S. durable goods orders fell by 4.0 percent in January, the largest decline in three years. Economists polled in a Bloomberg News survey had expected orders to fall by 1.0 percent. December figures were revised slightly upwards, from 3.0 percent to 3.2 percent. The sharp decline was led by a slowdown in demand for commercial aircraft and business equipment. On the other hand, auto orders rose by 0.9 percent, indicating a continuing strengthening of the auto industry. Unfilled orders rose by 0.5%, an encouraging indicator for future demand for manufacturing.

Orders for durables excluding transportation equipment fell by 3.2 percent in January, well below the consensus forecast of no change (0.0 percent), and a considerable drop from December’s figure of 2.1 percent. Orders for non-defense capital goods excluding aircraft declined by 3.1 percent, after rising by 2.8 percent in December. Shipments of non-defense capital goods, which is used in calculating gross domestic product, also decreased by 0.9 percent, after rising by 2.6 percent in November.

In the minutes after the data release, the U.S. Dollar tumbled against the Japanese Yen, declining from 80.548 towards 80.329, reflecting the disappointing durable goods results. Although the greenback pared back initial losses, it continued to trade lower at around 80.408 yen to the dollar at the time this report was written. 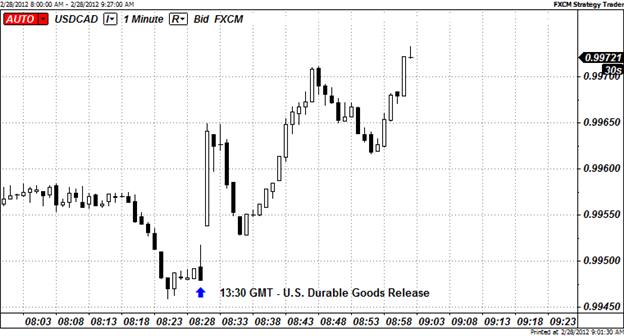 On the other hand, the U.S. dollar strengthened against commodities-driven currencies such as the Canadian dollar and Australian dollar in the minutes following the data release. The decline in U.S. durable orders is likely to have a negative flow-on effect on commodities demands in these nations. The greenback climbed from 0.9948 towards 0.9972 cents to the loonie, and was continuing its upward trend at the time that this report was written.