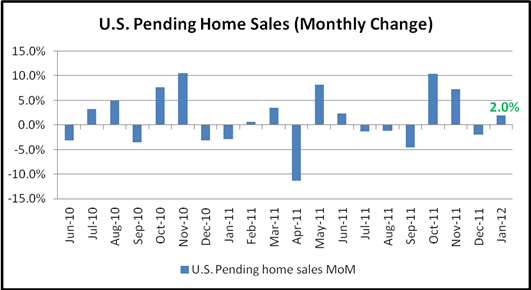 THE TAKEAWAY: The U.S. Pending Home Sales Unexpectedly Rebounded in January> Gains in the Northeast and the South Compensated Declines in the Midwest and the West> U.S. dollar Weakens

The numbers of Americans signing contracts to buy existing homes for January unexpectedly reached the highest level since April 2010, suggesting more meaningful sales gains going into spring home-buying season. The index of pending home sales, a forward-looking indicator that tracks home contract signings but the sale has not yet closed, rose 2.0 percent at a seasonally adjusted rate to 97 in January from a downwardly revised 95.1 in December. The print topped consensus forecast as forty-four economists polled by Bloomberg News had called for a moderate gain of 1 percent. From twelve month earlier, pending home sales surged 10.3 percent compared with 4.4 percent increase in the previous month.

Pending Home Sales came in stronger than projected last month as gains in sales in the Northeast and the South regions compensated for declines in the Midwest and the West. The numbers of contract signings to buy previously owned homes advanced 7.7 percent and 7.6 percent in the South and Northeast, respectively. In contrast, home contract signings in the Midwest unexpectedly retreated 3.8 percent in January, the first drop in fourth months. Also, pending purchases slipped 4.4 percent in the West, following a 6.2 percent decrease in the preceding month. The pending home sales index on an upward trend, though having fluctuated for some months, reflected headwinds of tight credit. However, improvements in job market for the third straight month, high affordability and rising rents would help sustain the housing recovery. “If and when credit availability conditions return to normal, home sales will likely get a 15 percent boost”, said Lawrence Yun, NAR chief economist. 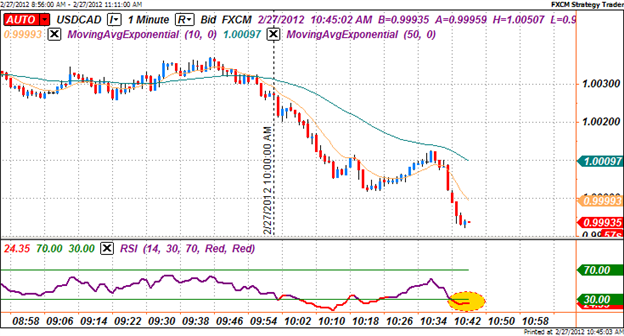 The minutes following the pending home sales report, the U.S. dollar weakens versus most of its major trading partners. The 1-minute USD/CAD chart above illustrates investors’ bearish reaction regarding to the reserve currency after the report. The greenback slipped about 30 pips from 1.0030 to 0.9999 within forty-five minutes. The Relative Strength Indicator falling below the 30-level, an oversold territory, indicated that currency traders massively sold the greenback in favor of the loonie. At the time this report was written, the Canadian currency reached parity, traded at 99.994 cents.