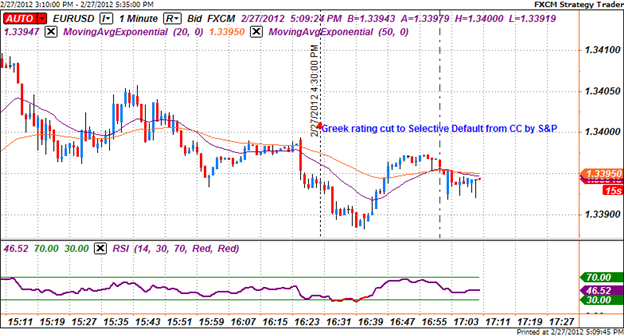 Standard & Poor’s Ratings Service announced late today that it downgraded Greek “CC” long-term and “C short-term” sovereign credit ratings to “selective default”. The downgrade stemmed from “the Greek government’s retroactive insertion of collective action clauses (CACs) in the documentations of certain sovereign debt series” last week. The agency considered this action a “distressed debt restructuring” as the action will diminish bondholder’s bargaining power in upcoming debt exchange. The “selective default” designation is a temporary and less serious form of “disorderly default” since Greek current debt restructuring is being managed and guaranteed by other EU countries.

However, the rating agency also said that it would consider the default “cured” after Greece completes its debt exchange that is scheduled to occur on or about March 12, 2012. At that point, Standard & Poor’s will likely to upgrade the country’s sovereign rating to the “CCC” category that reflects the agency’s view of “Greece uncertain economic growth prospects and still large government debt even after the debt restricting is concluded”.

Market participants showed fairly muted reaction regarding to the euro following the Standard & Poor’s announcement. Greek rating cut to “selective default” did not have significant impact on the euro as the downgrade was expected and the market has already priced in the move. Last Wednesday, Fitch rating agency also cut the Greece’s long-term ratings to “C” from “CCC”. As can be seen from the 1-minute EUR/USD chart above, the currency pair traded within in a tight range between 1.3387 and 1.3398. At the time this report was written, the single currency traded at $1.3395.