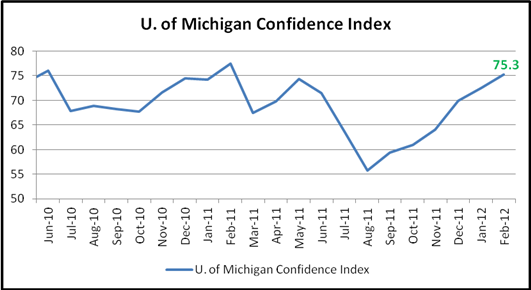 Confidence among U.S. consumers hit one-year high in February, reflecting their optimism about the prospective strength of the economy and rising expectations on business conditions, employment and income in 2012. The Thomson Reuters/ University of Michigan final index surprisingly mounted to 75.3 in February, the highest level since March 2011. The figure exceeded the median forecast as sixty economists polled by Bloomberg Survey had called for the print of 73 after a preliminary reading of 72.5. The print for January was 72.5.

U. of Michigan Confidence: January 2010 to Present

The increase in confidence over the past six months has been substantial, with the Sentiment Index climbing by one-third over the depressed August low triggered by the Congressional debt debate. Potential job gains and faster payroll growth contributed to the gain in consumer sentiment this month. Additionally, economic conditions index for February advanced to 83.0 from 75.0 in January, while economic outlook index climbed to 70.3 from 69.1. Inflation expectations for one year ahead slightly increased to 3.3 percent compared to 3.2 percent in the previous month while the figure for five years ahead remained unchanged at 2.9 percent. Obviously, Michigan sentiment which has regained nearly its highest level since the recession is a good sign that the world’s largest economy has been on pace of recovery. 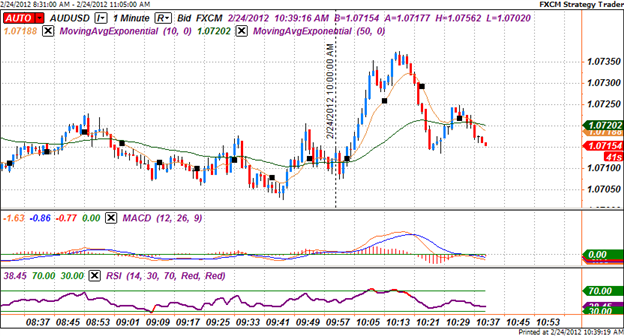 Minutes following the better-than-anticipated consumer sentiment report, the U.S. dollar immediately weakens versus most of its major trading partners. As can be seen from the 1-minute AUDUSD chart above, the reserve currency rapidly slid approximately 25 pips against the aussie. Regardless, the initial bearish reaction regarding to the greenback did not last long. The greenback witnessed correction after thirty minutes since the AUD/USD fell back 1.0710 -level. At the time this report was written, the aussie trades at $1.0715.