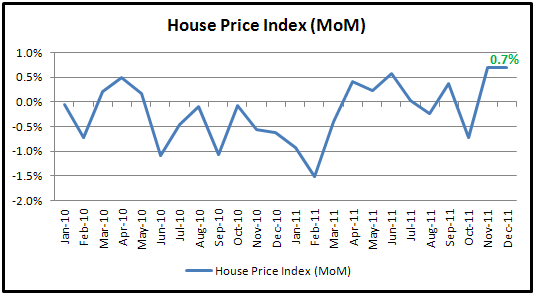 THE TAKEAWAY: The U.S. House Price Index Rose 0.7% in December > Housing Market has been Improving Slowly> USD Slides versus most of its Major Peers.

The U.S. home values grew for the second month in December from October’s trough, pointing to recovery, though remained slow, in the property market in early 2012. The seasonally adjusted monthly house price index (HPI) for December climbed 0.7 percent from its November value, Federal Housing Finance Agency (FHFA) reported today. The print was well above consensus estimates as economists polled by Bloomberg News survey had called for a modest gain of 0.1 percent. November figure was downwardly revised to an increase of 0.7 percent from a rise of 1.0 percent initially reported.

Despite of a significant gain in December, fourth quarter’s seasonally adjusted purchase-only house price index (HPI) slightly dropped 0.1 percent and was also 2.4 percent lower than a year earlier. Home foreclosures introduced additional supply to the inventory of unsold homes that contribute to price decline. 27 states and the District of Columbia reported gain in purchase-only HPI in the fourth quarter, keeping the overall index from decline further. Of the nine Census Divisions, the West South Central Division experienced the strongest price in the fourth quarter with 1.1 percent price increase. In contrast, prices were weakest the Middle Atlantic Division with 1.2 percent decline. Among 25 most populated metropolitans, fourth-quarter price declined the most in the Chicago-Joliet-Napervile, IL area but advanced most in Warren-Troy- Farmington Hills, MI. 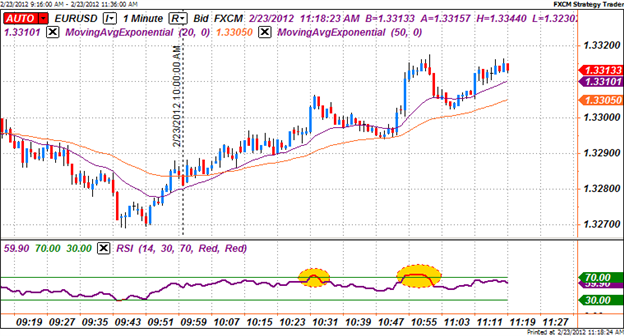 The U.S. dollar loses ground versus most of its major trading partners North America morning trade today. Minutes following the house price index report, the reserve currency extended loss versus the euro. As can be seen from the 1-minute EURUSD chart above, the single currency climbed approximately 37 pips against the reserve currency from 1.3280 to 1.3317 within an hour. That was off an overnight session high of $13342 when German business sentiment came in better-than-expected. The Relative Strength Indicator crossing above the 70-level twice indicated that currency traders was massive selling the dollar in favor of the euro. At the time this report was written, the euro strengthens 0.45 percent versus the greenback, trades at $1.3313.