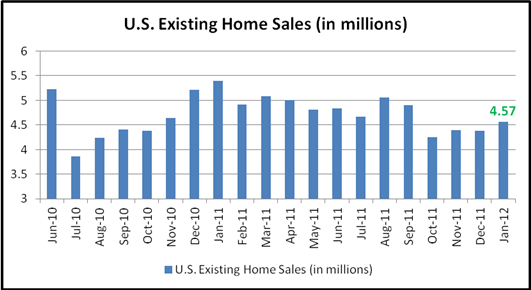 Sales of previously-owned homes hit four-month high in January on “pent-up household formation, record-low mortgage rate, bargain home prices and sustained job creation”, lending hope that housing sector will improve in early 2012. The National Association of Realtors reported today that existing home sales advanced4.3 percent to a seasonally adjusted annual rate of 4.57 million in January from the revised 4.38 million in the previous month. The reading, however, missed consensus forecast as economists polled by Bloomberg survey had predicted a print of 4.66 million. December figure was downwardly revised to 4.38 million from 4.61 million initially reported.

Existing home sales recovered at fastest pace in four month in January largely due to an increase in completed transactions of single-family, condominiums and co-ops. Single-family home sales surged 3.8 percent to a seasonally adjusted annual rate of 4.05 million in January, up 2.3 percent January 2011 level. Meanwhile, existing condominium and co-op sales climbed 8.3 percent to 520 thousand in the month, down 10.3 percent from a year ago, though. 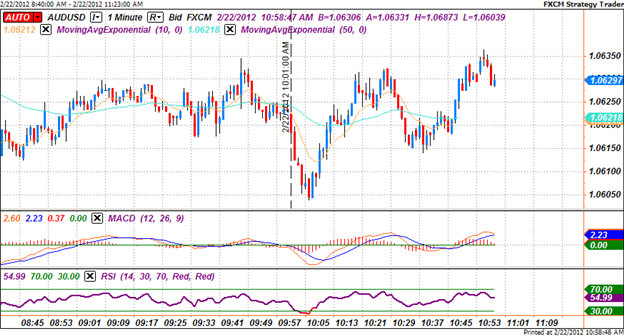 The U.S. dollar strengthened versus most of its major peers versus its Swiss franc and euro counterparts during North America morning trade today as risk aversion scaled back after Fitch downgraded Greece’s credit rating to C from CCC and warn of possible default in near-term. Regardless, the reserve currency pares gain minutes following the weaker-than-expected existing home sales report. The reading is consistent with Fed’s recent assessment that U.S. housing sector showed sign of improvement but “remained depressed” and “there is still a long way to get back to normal level”.

As can be seen from the 1-minute AUDUSDC chart above, the currency pair briefly fell 15 pips five minutes after the report, then immediately climbed approximately 30 pips from 1.0605 to 1.0635. At the time this report was written, an Australian dollar traded at $1.0629.