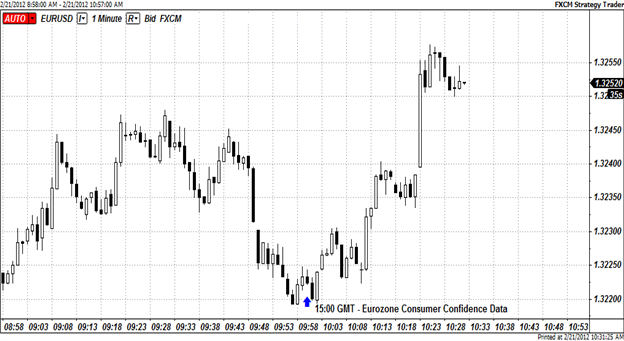 Consumer confidence within the seventeen euro-area countries that use the euro improved in February, despite ongoing uncertainty that a Greek debt deal could be reached. The Brussels-based European Commission reported today that the flash consumer confidence indicator in the single-currency region increased to -20.2 in February from -20.7 in the month prior. The print fell slightly short of the consensus forecast of -20.1, according to a Bloomberg survey of economists. Nonetheless, the latest figure indicates that consumer confidence is at its highest level since November.

The improvement in consumer confidence adds to signs that the Eurozone economy may be stabilizing, and supports ECB President Monti’s statement following the last rate decision meeting on February 9, 2012, that “available survey indicators confirm some tentative signs of stabilization in economic activity at a low level around the turn of the year”. Easing inflationary pressures and some stabilization in financial markets have also been factors in the improving consumer sentiment.

In the minutes after the data release, the euro strengthened against the major currencies, gaining 36 pips against the U.S. dollar. The euro rallied as the market gained confidence that the euro-zone economy is showing further signs of stability, and added to yesterday’s news that a second Greek debt deal had finally been reached. At the time of this report, the euro was trading at 1.3252 U.S. dollars.