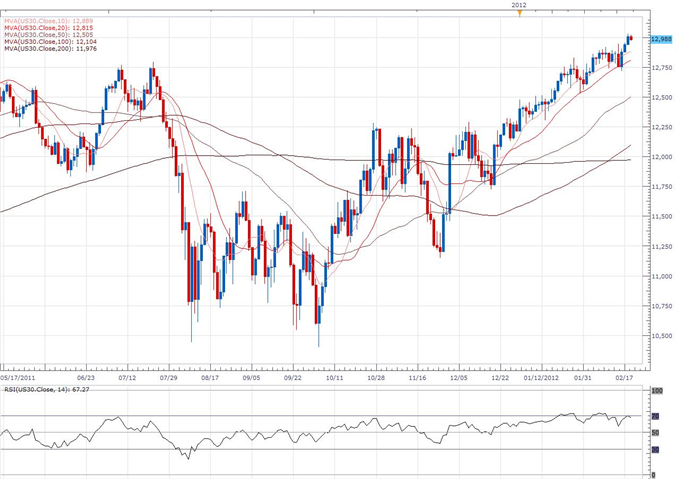 Technical: Remains very well supported on any form of a dip with the 20-Day SMA continuing to prop. However, the market is trading by multi-week highs and daily studies are starting to track in overbought territory to warn of short-term structural shift. But, a close back below the 20-Day SMA will be required to trigger bearish price action and open deeper setbacks. Initially however, a break below Monday’s low at 12,948 could get things going.

Fundamental:.US equity markets are approaching their cheapest level ever when compared with bonds. The Fed’s zero-percent interest rates have stimulated large flows toward equity buying as money becomes effectively free to borrow and invest. Although markets were closed yesterday for US Presidents day, US equity futures were up on optimism caused by the ratification of the Greek bailout. 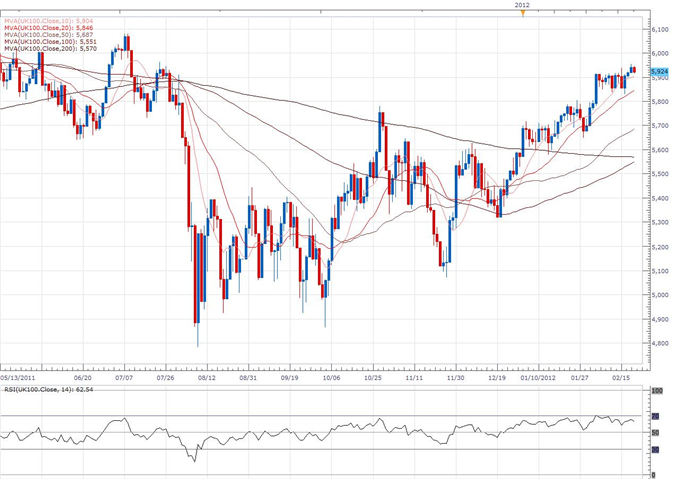 Fundamental: UK stocks dropped off recent highs as markets considered whether or not the Greek bailout will allow the troubled nation to get back on track fiscally. Oil companies led the decline, and Iran’s boycott of the UK was thought to also be weighing on market sentiment. Meanwhile, the state-owned Royal Bank of Scotland is expected to post losses soon amid extensive cutbacks. 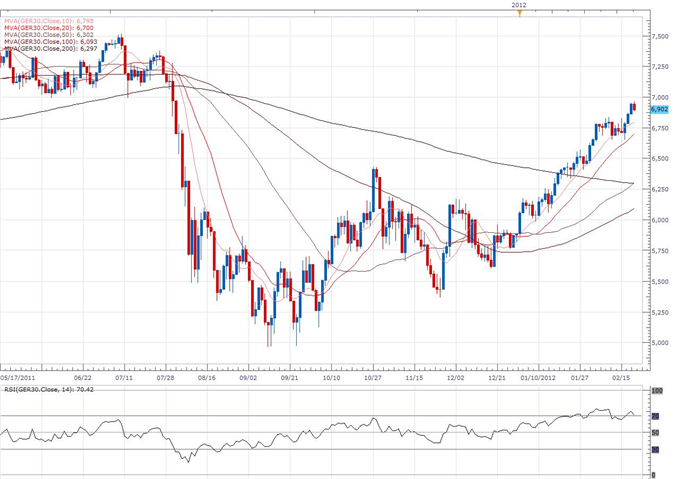 Technical: No signs of reversal just yet despite daily studies tracking into overbought territory on the daily chart. Still, while the up-trend remains intact, there are risks for a significant short-term pullback ahead. Look for a break below the 20-day SMA to confirm short-term shift and open the door for an acceleration of declines. Selling rallies towards 7,000 could also prove to be a compelling but more risky counter-trend strategy.

Fundamental:European stocks fell from a six-month high yesterday on concerns that the Greek debt crisis will persist even after a second bailout. Beleaguered Greece was awarded a second bailout yesterday after European governments wrung concessions from private investors and incorporated ECB profits to protect the euro area from default. However, IMF officials yesterday described the many things that could go wrong in a country unable to break out of an economic slump by devaluing its currency. 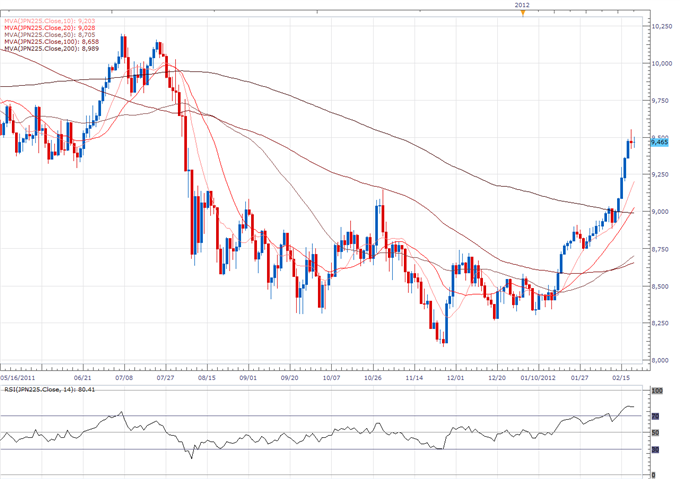 Fundamental: Markets appear to be stalling out after a sharp climb caused by the BoJ’s announcement of increased quantitative easing. Market players have speculated that shares overheated, and that a correction is in order. Recent losses were led by the steel, electronics, and auto industries. The announcement of a second Greek bailout yesterday helped to mitigate the downside correction in Japanese equities; however, the boost was seen as short-lived. 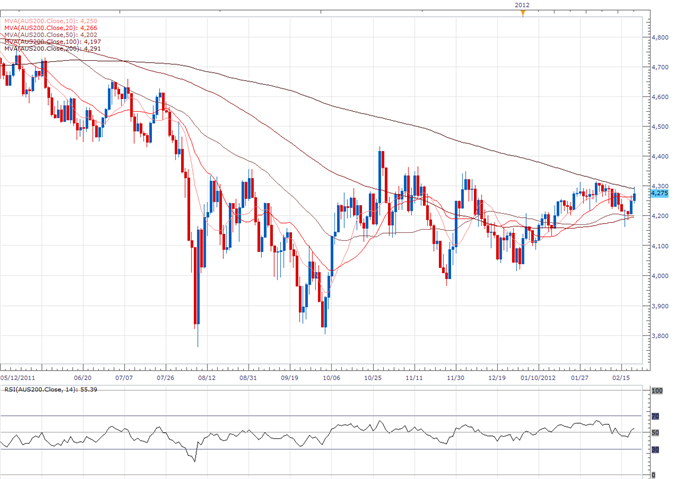 Technical: Setbacks have been well supported for now by 4,164 and the market has once again found renewed bids to attempt a retest of the recent multi-session highs by 4,315 further up. Still, we see risks for more consolidation rather than any meaningful upside break beyond 4,315 and would recommend selling rallies towards the latter in favor of a range trade.

Fundamental:As the Greek bailout led Aussie shares higher yesterday, the RBA said it has scope to ease monetary policy if needed. This comes after the central bank surprised many by keeping the benchmark interest rate unchanged this month, despite the European debt woes. Meanwhile, a record rice harvestthis year is seen boosting rice stockpiles to a decade high, in a positive development for the commodity-tied Aussie economy.