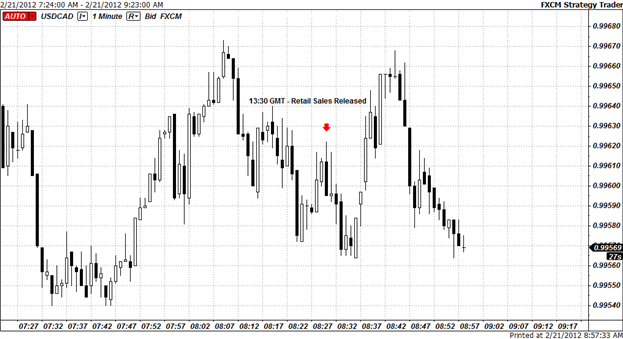 Canadian retail sales fell in December for the first time since August 2011, edging down 0.2 percent, in line with the consensus forecast. November’s sales figures were revised from 0.3 percent to 0.4 percent.

Meanwhile, retail sales less auto was flat in December, after four consecutive months of growth. Sales in November were revised from 0.3 percent to 0.4 percent. The print of 0.0 percent fell short of the forecasted 0.1 percent according to a Bloomberg news survey of economists.

The decline in retail sales was led by motor vehicles and parts dealers and gasoline stations. Motor vehicle and parts dealers sales fell by 1.0 percent for the first time in five months, mainly due to cooling demand for automotive parts and accessories, and new car dealers. Gasoline stations reports a 1.1 percent decrease in sales after rising for four straight months. On the other hand, food and beverage store sales recorded higher sales with a 1.0 percent rise in December.

Immediately after the data release, the Canadian dollar saw a slight gain of 6 pips against the greenback before markets corrected and slipped 11 pips to 0.9967. However, at the time of this report, the loonie regained its footing against the U.S. dollar and was trading around 0.9957. The Canadian dollar had fallen against the U.S. dollar in earlier trading, as the news of a Greek debt deal and a cautious reaction by markets dominated this morning’s market movements.